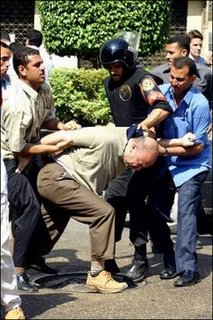 Egyptian security forces clubbed demonstrators in the streets on Thursday and a court rejected an appeal against a jail term by a former election challenger to President Hosni Mubarak in twin blows to the opposition. Plainclothes security men beat and kicked protesters rallying in support of judicial independence in Cairo, while Egypt’s highest appeal court threw out the appeal by jailed opposition leader Ayman Nour.

“The Egyptian government’s handling of this case represents both a miscarriage of justice by international standards and a setback for the democratic aspirations of the Egyptian people,” said McCormack.

Nour had appealed against a five-year prison sentence handed down to him in December. He cannot launch another appeal. 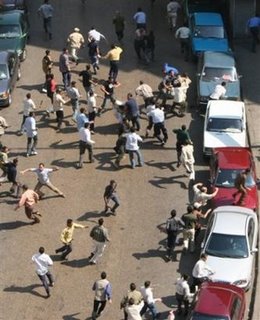 Protestors flee as police crack down on demonstrators in central Cairo, arresting 100 members of the Muslim Brotherhood, including one of its leaders, as they were protesting Thursday May 18 2006, near a Cairo court where two hearings for pro-reform figures were scheduled. The show of force came after the European Union and the United States condemned the handling of demonstrations in Cairo last week when 255 people were arrested. On Thursday, thousands of riot police and hundreds of plainclothes officers were deployed in streets leading to the courthouse in downtown Cairo as they attempted to prevent opposition activists from gathering. (AP Photo/ Alfred de Montesquiou)

The White House today urged Egypt to release the leading opposition leader. The US also raised concerns about Egypts commitment to reform. 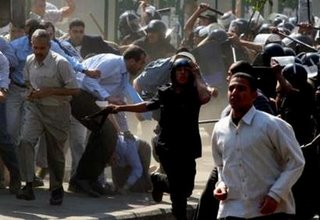 Egyptian riot police clash with protesters during a protest in Cairo May 18, 2006. Plainclothes security men beat, kicked and clubbed protesters demonstrating in support of Egyptian judges and judicial independence in central Cairo on Thursday. (REUTERS)

Freedom for Egyptians has more on the fate of Ayman Nur.
Egyptian Sandmonkey says this marks the end of Ayman Nur.