** The tests also show that the “victim” had sex with someone…
but, it was not from any Duke lacrosse player! ** 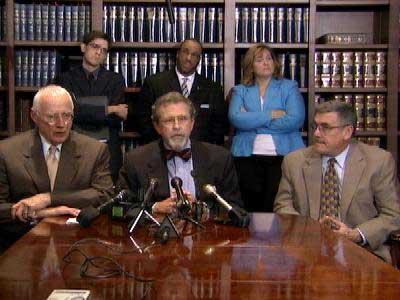 A defense attorney in the Duke University lacrosse investigation said Friday that a second round of DNA test results shows a partial match to members of the team on one item, but no “conclusive match” between the accuser and any player.

Defense attorney Joe Cheshire said at an early evening press conference that a single source was linked to DNA during the testing, but it was identified by Durham police as an unidentified male who was not on the team.

The defense attorneys just reported in a news conference saying that their was no DNA material that matched any of the Duke lacrosse players that were indicted.

The woman says the finger nails were ripped off during her struggle.

The attorney for one of the Duke lacrosse players was upset that the defense team just got the information even though the prosecuting attorneys had leaked the information earlier in the week.

Talk Left has thoughts on the flawed photo lineup procedures used in during the investigation.

Earlier this week, North Carolina black organizations set up a site called “Our Hearts” for the “survivor” of the “attack”:

The Triangle Urban League (TUL), the NC Conference of NAACP Branches, along with several Black newspapers in North Carolina, are set to unveil a community-based website that allows people from across the country to express their love, support and concern for the alleged survivor in the Duke lacrosse gang rape case.

Keith Sutton, TUL president/CEO, and Dr. William Barber, NC NAACP president, will make comment on why Black community leaders and the Black Press came together to provide a vehicle by which the survivor can realize that she is not alone.

The false accuser’s life is certainly sad. It is good that people care about her. It is not good that they are promoting racism here, though.