Malaria is still the leading killer disease in the world. Statistics show that in Africa, a person dies every 30 seconds from the disease.

The European Union is warning African nations that they will be sanctioned if they use DDT, the insecticide that environmentalists love to hate, in their fight against malaria. But, African nations argue it is the most effective and cheapest way to fight malaria. 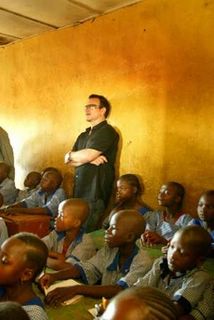 U2 lead singer and anti-poverty campaigner Bono stands at the back of a classroom during his visit to Ido primary school in Nigeria’s capital Abuja, May 22, 2006, during a six-nation tour of Africa. (REUTERS/Afolabi Sotunde)

Bono praised African mosquito net companies with their “modern technology” in fighting malaria in Africa in his recent visit to a bednetting plant:

Rock music star and humanitarian aid champion Bono lauded some African countries this weekend for their efforts to control malaria, which claims millions of lives on the continent every year.

“In the 21st century, we have Africans using modern technology to find its own solutions to deadly malaria,” said Bono Saturday after visiting A-to-Z Textile Mills, which manufactures insecticide-treated bednets, in the northern Tanzanian town of Arusha.

“I am excited over this solution which must be encouraged,” he added.

Bono also called for more rich corporations to join in such “great production to save lives of the poor people.”

After visiting the factory, the rock star said he was amazed with what he saw in Arusha and in earlier stops on his African tour in South Africa, Rwanda and Lesotho.

“I will continue to press for more assistance in the fight against diseases and poverty in Africa.”

But, many African nations are turning to DDT use to fight malaria. Uganda is one of the African nations that will use DDT in its fight against malaria, because it works best:

Uganda will proceed with the use of the pesticide DDT to control malaria, despite threats by the European Union that it could lead to its agricultural exports being locked out.

The head of the Economic, Trade and Social sectors desk at the EU delegation to Uganda, Tom Vens told The EastAfrican that the EU had warned the government against the use of DDT, which scientists claim, can cause cancer among humans if ingested.

“We have advised the government that they are taking a risk if they go ahead with this DDT use, he said. “We, however, leave it to the government, of course, to decide. But nothing will happen, at least on the official side, if they decide to use DDT in strict compliance with the Stockholm Convention,” he said.

“We have to kill malaria using DDT and the matter has been settled that DDT is not harmful to humans and if used for indoor-insecticide spraying. It’s the most effective and cheapest way to fight malaria,” Mr Muhwezi said.

Ugandan officials argue that they must use DDT to fight this leading killer of Ugandans:

“We have to kill malaria using DDT and the matter has been settled that DDT is not harmful to humans and if used for indoor-insecticide spraying. It’s the most effective and cheapest way to fight malaria,” Mr Muhwezi said.

He said a study released in November 2005 found no link between DDT and conditions such as impotence, infertility, neurological damage, congenital abnormalities and cancer.

Malaria kills more people than any other disease in Uganda each year and is responsible for 21 per cent of hospital deaths and 40 per cent of illness in the country’s health facilities.

Kenya is another African country that has seen a rise in malaria since the ban on DDT by EU countries. It is likely to start using the chemical again to fight mosquitoes.

In Namibia, where malaria is identified as the leading cause of death, the mosquito nettings that are distributed to the families often end up used as fishing nets.