This may put a glitch in Speaker Pelosi’s plans…

Democrats found out the naked truth about one of their candidates to take the House of Representatives back from Republicans in November:

Brad Blanton has written to Democratic leaders in the sprawling district that he runs honesty workshops where people get naked and talk about their sexual histories. 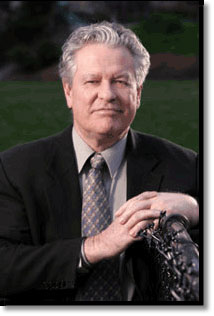 Figuratively baring all in his letter, Blanton said there might be some who believe “I could be an embarrassment to the party.”

Democrats in the district will meet in a convention Saturday to decide whether to nominate Blanton or to choose not to have a candidate. The district, which runs from the west end of Richmond northwest to Page County, is represented by Republican Eric I. Cantor of Henrico, who is the chief deputy whip in the House of Representatives. Cantor is seeking a fourth term.

“People are concerned because I have run workshop groups involving nudity, used profanity in my books, have a comedy routine about establishing a new religion, ‘Futilitarianism,’ and have been arrested a number of times,” Blanton wrote in a letter to district leaders. The letter was first disclosed by the Culpeper Star-Exponent.

Well, he’s a shoe-in!… Maybe “Speaker Pelosi” could have him lead the Chamber in prayer from time to time.

Local democrats appear to support Blanton who is the only democrat in the race against incumbent Rep. Eric Cantor, (R-Richmond).

I see nothing wrong with naked therapy but it may be a stretch to call it progressively-conservative.