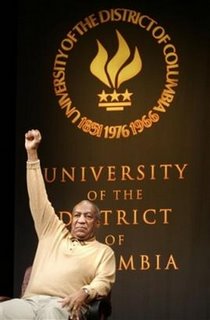 Entertainer Bill Cosby gestures to the audience on the campus of University of the District of Columbia, Tuesday, May 16, 2006, in Washington. The panel discussion on issues facing low income Americans is being called a ‘Call Out with Bill Cosby’. (AP Photo/Lawrence Jackson)

Bill Cosby continued to Call Out to the balck community this weekend with stops at colleges in Atlanta and Washington D.C. Cosby says his message is the truth that people have been waiting to hear:

In an interview between sessions Tuesday, Cosby said he was undeterred by critics, who he says don’t want to acknowledge that their way of doing things hasn’t worked. “A lot of the people who criticize me are angry because the job that they were supposed to be doing hasn’t been getting done,” he said. “We’ve been able to give people examples of other people in their communities who’ve been down and are now up. If I didn’t like poor people, why would I come and tell them how to make their lives better?”

Cosby says he has been encouraged by the response he has received on his tour. He has found, he says, that “people have been waiting to hear the truth, they don’t want to be coddled. … They want these issues talked about.”

He is especially interested in reaching black males and convincing them of the importance of embracing their roles as fathers. At the same time, he says that women have to take control.

Bill Cosby is not planning on letting up in challenging the black community to look within and take charge. On Sunday Cosby spoke to a graduating class at Spelman College that this year is 70% female:

“You have to know that it is time for you all to take charge,” Cosby said. “You have to seriously see yourselves not as the old women where the men stood in front and you all stood behind, because the men, most of them are in prison.” 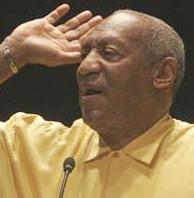 Added Cosby: “It is time for you to pick up the pace and lead because the men are not there. They’re not there and every one of you young women know it.”

When one of the 500 members of the graduating class accepted her diploma, Cosby said, “there’s no time for you to fool around anymore. …You’ve got to [get serious] because our race depends upon you and your sisters graduating all across the United States to realize that what’s left is you.”

Cosby, 68, said he realized that part of his speech would not go over well among many in the audience.

“I’m going to speak to these young women about taking charge and I know it’s going to be fearful and it’s going to tweak a lot of things,” he told The Associated Press in an interview before the ceremony. “They have to because it’s in their lives and it’s real. It is there. They are going to be needed to protect the legacy that is good.”

Cosby told the graduates that the same male students who are dropping out of high school “have memorized the lyrics of very difficult rap songs. …And they know how to send their sperm cells out and then walk away from the responsibility of something called fatherhood.”

Cosby said his comments were not directed to all black males, but noted that 70 percent of black graduates this year are female.