Yesterday we were warned that- “Da Vinci Code” Uproar is Similar to Mohammed Cartoons Scandal!

Today, the madness has begun…

Protesters scream:
“The Da Vinci Code: you buy a ticket — you sell Jesus.” 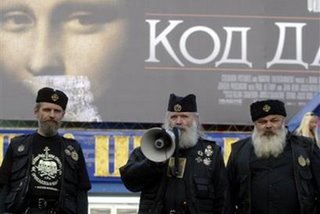 Around 100 protesters representing a Russian Orthodox movement Thursday burned a poster advertising the The Da Vinci Code at Pushkin Square in central Moscow, on the day of the controversial film’s premier, RIA Novosti news agency reports. Protesters at the meeting, organized by the Union of Orthodox Citizens, held icons, crosses and banners, one of which read: “The Da Vinci Code: you buy a ticket — you sell Jesus.”

Torchings have been reported:
Around 100 protesters representing a Russian Orthodox movement Thursday burned a poster advertising the The Da Vinci Code at Pushkin Square in central Moscow.

Hardliners travel to confront the disrespect! 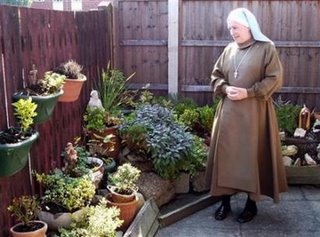 Sister Mary Michael stands in a grotto in her garden during an interview in Lincoln, England, August 17, 2005. The only sign of Christian protests against The Da Vinci Code in Cannes was Sister Mary Michael, who travelled from England to be at the red carpet world premiere of the film. (Andrew Gray/Reuters)

Devout believers have taken to the streets! 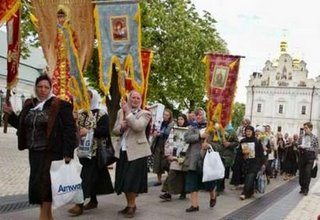 Ukrainian orthodox believers hold a religious procession in Kiev?s Pechersk Lavra monastery to protest against the release of the movie ‘The Da Vinci Code’ in Kiev May 19, 2006. (Reuters)

Movie theatres vow they will not back down! 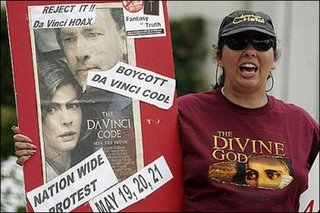 Lisa Paris protests outside Sony Pictures Entertainment on 18 May 2006 in Culver City, CA against the release of the film “The Da Vinci Code.” Angry US Roman Catholics and conservative Christians declared “showtime” for nationwide protests against new religious blockbuster “The Da Vinci Code,” which they say mocks their faith.(AFP/Robyn Beck)

The horror! The absolute madness!

What’s next, fatwas?
When will it stop?