Despite the peace promises between the two rival factions of the Palestinian territories last week, the infighting has only escalated with two Hamas figures shot dead last night. As a result of this, Hamas deployed its own forces across Gaza to reverse the tide of lawlessness. 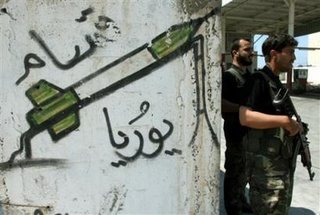 Palestinian militants of the Islamic group Hamas stand guard next to a wall with a graffiti of a Qassam rocket at the Nusseirat refugee camp in the central Gaza Strip, Wednesday, May 17, 2006. The Palestinians’ defiant Hamas-led government sent a new militant force into the streets of Gaza on Wednesday, disregarding President Mahmoud Abbas’ order banning the creation of the security body and raising the stakes in their deepening power struggle. (AP Photo/Khalil Hamra)

After the Hamas assassinations earlier in the day, Hamas sent its own security forces out into the streets to curb the violence and lawlessness:

The forces, armed with Kalashnikov rifles and rounds of ammunition, took up positions on street corners and landmark locations such as Palestine Square.

(Interior Minister) Siam announced on April 21 he was creating a special force of gunmen from armed factions to supplement the work of police and security officers in clamping down on rampant chaos.

He also nominated top Gaza-based militant Jamal Abu Samhadana, who is wanted in Israel for scores of attacks, to a senior position in the interior ministry to oversee various security elements, including the new force.

Abbas, who has overall responsibility for security, dismissed the force and the appointment of Abu Samhadana as unconstitutional. 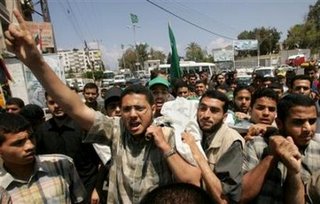 Angry Palestinians shout slogans as they carry the body of Mohammed Tatar, a senior Hamas activist who was killed by unidentified gunmen, during his funeral in Gaza May 17, 2006. (Suhaib Salem/Reuters)

Fatah said that one militant was mistakenly shot in violence last night:

The existing security services are dominated by members of Fatah, which has been involved in a growing number of clashes with followers of the radical Islamist group Hamas which formed its first government in March.

Security sources said Wednesday that a Hamas follower had been killed in error overnight by gunmen from the faction’s armed wing. 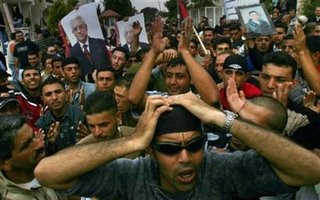 Palestinian workers chant slogans against the Hamas government, demanding to receive their salaries, during a protest outside the Palestinian Prime Minister office in the West Bank town of Ramallah, Wednesday, May 17, 2006. (AP Photo/Muhammed Muheisen)

Of course, the Palestinians have their own idea who was behind the killing last night:

Without offering evidence, both Hamas and Fatah suggested Israel was somehow involved, saying it was the only party that stood to benefit from growing chaos.