The Right Honourable Tony Blair, M.P., Prime Minister of the United Kingdom of Great Britain and Northern Ireland, spoke on the challenges facing the international community in the 21st century and on the policies and institutions needed to address these challenges in Gaston Hall on the campus of Georgetown University. 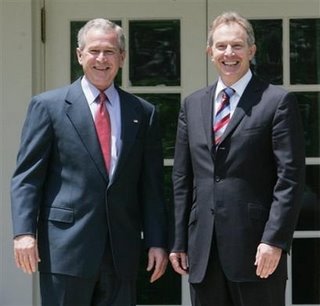 President Bush, left, and British Prime Minister Tony Blair, right, pause outside the Oval Office to look at the Rose Garden before walking down the Colonnade of the White House on their way to lunch, Friday, May 26, 2006 in Washington. (AP Photo/Pablo Martinez Monsivais)

Tony Blair called for major reform of the United Nations and support for the Iraqi Democracy today in his foreign policy speech at Georgetown University:

Iraq was also a key theme of Mr Blair’s address, as he repeated his call for more support for the new government there.

In his address on Friday, the UK leader acknowledged the invasion may have split the international community, but called on it now to support its burgeoning democracy.

Mr Blair, who held talks with new Iraqi Prime Minister Nouri Maliki in Baghdad this week, said the new government was “a child of democracy struggling to be born”, and that “the international community are the midwives”.

“You may not agree with the original decision, you may believe mistakes have been made, you may even think how can it be worth the sacrifice, but surely we must all accept this is a genuine attempt to run the race of liberty,” he said.

President George Bush also pushed for major reform at the UN in his joint press conference with Prime Minister Blair on Thursday:

I’d like to see a United Nations that’s effective, one that joins us in trying to rid the world of tyranny, one that is willing to advance human rights and human dignity at its core, one that’s an unabashed organization — is unabashed in their desire to spread freedom. That’s what I’d like to see, because I believe that freedom will yield to peace.