Representatives from all of the Iraq’s religious and ethnic communities were in attendance on this historic day,
VIDEO HERE

After five long months of bickering, the Iraqi Cabinet was announced and approved today. A Sunni representative tried to stop the proceedings but he was voted down in this news era of Iraqi politics! 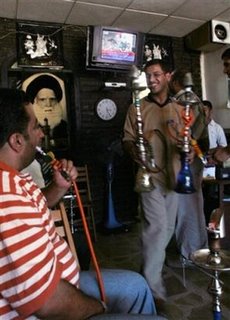 In his first speech Iraqi’s new Prime Minister Nouri al-Maliki said that security would be the top concern of his administration:

In his first address, al-Maliki told parliament he would make restoring stability and security the top priority of his new administration. He said he would “work fast” to improve and coordinate Iraqi security forces so they can reduce attacks by insurgent groups and militias.

Al-Maliki also said he would set “an objective timetable to transfer the full security mission to Iraqi forces, ending the mission of the multinational forces.”

The cabinet was approved only three years after the fall of the brutal Saddam Hussein Regime. 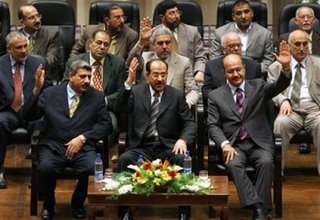 After months of bickering, the Iraqi cabinet members were announced, approved and later took an oath to serve their country today in Baghdad:

In a speech after the inauguration, President Jalal Talabani, a Kurd, predicted that the new government will help his oil-rich country resolve its many problems.

“It will achieve security, stability, peace and prosperity. Working with our people and our allies, this national unity government will purge Iraq of its evil forces, allowing it to once again become independent and prosperous,” Talabani said.

The top ministers include Hussain al-Shahristani, a Shiite who will oversee oil; Bayan Jabr, a Shiite in charge of the Finance Ministry; Hoshyar Zebari, a Kurd who is foreign minister; and Abed Falah al-Sudani, a Shiite heading the trade ministry. 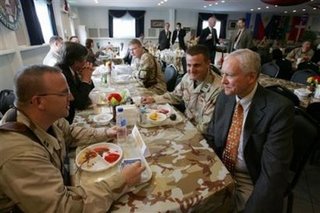 U.S. Senator Orrin Grant Hatch from Utah, right, joins U.S Forces for breakfast in the heavily fortified Green Zone in Baghdad, Iraq Saturday May 20, 2006. Hatch along with U.S. Senator Gordon Harold Smith are in Baghdad for a short visit to boost the morale of the U.S forces from their own states. (AP Photo/Marco Di Lauro)

This was a historic day for the Middle East’s democratically elected government:

“This is a historic day for Iraq and all its people,” deputy parliament speaker Khalid al-Attiyah said at a nationally televised news conference as the legislators gathered.

“It is the first time that a full-term, democratically elected government has been formed in Iraq since the fall of the ousted regime. This government represents all Iraqis,” said al-Attiyah, a bearded Shiite cleric wearing a white turban.

The Jawa Report is celebrating this historic day.
Slapstick has very exciting news out of Iraq (and Colorado) today.
Pajamas Media has a blogger roundup on this great news.