Fatah members found a way to show their dissatisfaction with the bias from Al Jazeera news:

The cars, one belonging to Al-Jazeera’s Jerusalem bureau chief, Walid Omari, were parked in a lot outside the TV station’s office in Ramallah. Thick smoke billowed from the parking lot, covering the eight-story high-rise.

“The fire is definitely arson,” Omari told The Associated Press, but stopped short of accusing anyone.

In their growing battle, Fatah and Hamas have both accused Al-Jazeera of bias.

The next time there is a Fatah rally scheduled… 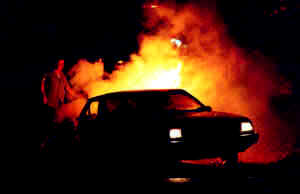 …Al Jazeera may think twice before they decide to skip it!

The Fatah supporters in Ramallah, torched the three Al Jazeera news vehicles in a parking lot after their protest was ignored by the news channel:

Three cars belonging to the al-Jazeera news network were torched in Ramallah on Saturday night.

The cars were parked in the underground parking lot of the City Center Building in downtown Ramallah, where al-Jazeera has a large bureau on the eighth floor.

Walid Omari, chief correspondent of al-Jazeera in the West Bank and Gaza Strip, said the building was evacuated of all its occupants because of the fire. He said he did not know who was behind the fire.

But sources in the city told The Jerusalem Post that Fatah supporters were behind the torching of the al-Jazeera cars.

The sources said the Fatah supporters were angry with al-Jazeera because it had not covered an anti-Hamas demonstration in the city by Fatah earlier in the day.

This is not the first time that the channel has had problems with its audience.

It wasn’t a very good day for Palestinian intelligence chief either, with the assassination attempt, and all.