Although, this did not make the headlines…

It was followers of Muqtada al-Sadr who attacked British and Iraqi troops Saturday in Basrah. 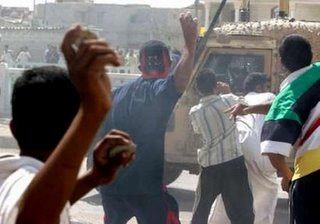 Iraqi residents throw stones at a passing British armoured vehicle near the British helicopter crash site in Basra, 550 Km (341miles) south of Baghdad, May 6, 2006. A British military helicopter was shot down by a rocket in the southern Iraqi city of Basra on Saturday, Iraqi police said, and firefighters said they had found four charred bodies in the wreckage. The helicopter burst into flames on impact and a thick cloud of black smoke billowed into the air. Hundreds of youths quickly surrounded the area, yelling and pelting British troops cordoning off the crash site with rocks. (REUTERS/Wisam Ahmad)

After a British helicopter was shot down in Basrah, Al Sadr supporters chucked rocks and gasoline bombs at British and Iraqi soldiers who had rushed to the crash site:

Iraqi police said four British crew members died in the crash in the southern city, and four Iraqi adults and a child were reported killed during the ensuing melee when Shiite gunmen exchanged fire with British soldiers who hurried to the scene. About 30 civilians were injured.

British soldiers with armored vehicles rushed to the site and were met by a hail of stones from a crowd of at least 250 people, many of them teenagers, who jumped for joy and raised their fists as thick smoke rose from the wreckage.

As many as three armored vehicles were set on fire, apparently with gasoline bombs and a rocket-propelled grenade, but the troops inside escaped unhurt, witnesses said.

The crowd chanted “we are all soldiers of al-Sayed,” a reference to radical Shiite cleric Muqtada al-Sadr, an ardent foe of foreign troops being in Iraq.

…Trouble in the largely Shiite region is due in part to the growing influence of al-Sadr, who led two armed uprisings against U.S.-led forces in 2004 and who has been an outspoken critic of the U.S.-led foreign military mission.

Many of the news reports today did not mention that Al Sadr loyalsts were involved or that there were Iraqi forces with the British troops who were attacked. Without these details, the story has a whole different feel to it. 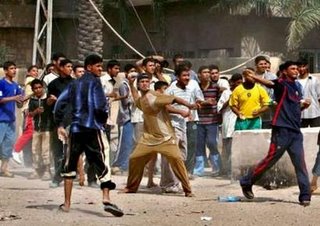 In other news, the radical Al Sadr’s followers are demanding control over five of Iraq’s 19 public-service ministries. 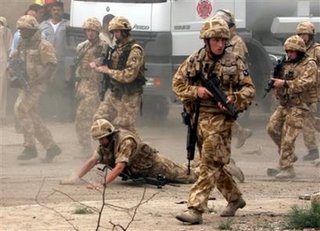 One British trooper falls after apparently being hit by a rock, as British troops move towards helicopter crash site in Basra, Iraq’s second-largest city, 550 kilometers (340 miles) southeast of Baghdad, Saturday, May 6 , 2006. A British military helicopter crashed apparently downed by a missile, triggering a confrontation in which jubilant residents pelted British rescuers with stones, hurled firebombs and shouted slogans in support of a radical Shiite cleric. (AP Photo/Nabil Al-Jurani)

The Jawa Report wonders why Al Sadr is still walking this earth.
Jihad Watch has more.

Several readers sent this news about the brutal death of Atwar Bahjat. Lord, the inhumanity!

Update: Parts of the gruesome story of Atwar Bahjat’s death is a hoax, but no less inhumane.