Don’t look for this on the evening news!

This was not your typical Code Pink reaction for Representative Murtha.

This time he wasn’t given bouquets for his “cut and run” speech .

Representative John Murtha, the liberal Hawk, who has consistantly spoken out against the Iraq War the past couple of years, was heckled at a commencement speech he gave at Seton Hill University in Pennsylvania this weekend:

Rep. John Murtha called for the immediate withdrawal of troops from Iraq during a university commencement speech, drawing mixed reaction.

“We don’t care. This isn’t about graduation,” Leonard Pierce, the parent of a graduate, called out several times from the audience during Seton Hill University’s commencement Saturday.

Murtha ignored the brief disruption and told the audience that Iraq has failed to restore prewar levels of oil production and still struggles with inadequate electrical power.

“Claims of progress and victory” have been contradicted “by the real conditions on the ground,” said Murtha, D-Pa.

Murtha, 73, a retired Marine colonel who has generally been hawkish on war issues, shocked Washington in November when he said the war could not be won and it was time for troops to come home.

Murtha was wrong to bring up the war – whether for or against – during the graduation ceremony, Pierce said.

And, not everyone was so excited that Pink Badge of Courage Award Winner, Representative Murtha, was going to be the speaker at commencement. 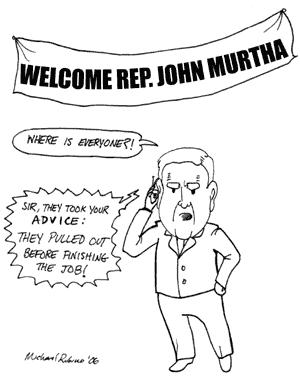 An editorial cartoon at the Seton Hill Republican webpage. Feel free to leave them a comment HERE

Seton Hill University president Jo Ann Boyle thought Murtha’s cut-and-run proposals this past year in the House made him the right choice for commencement:

Boyle said this controversy did not concern her when choosing Murtha as a speaker, saying that if anything it made him a “more timely decision.”

A university weblog has more on the incident.