The shrieking Falun Gong activist at the White House, yesterday… for three minutes…

Someone… anyone… please silence the Falun Gong activist,… geesh. 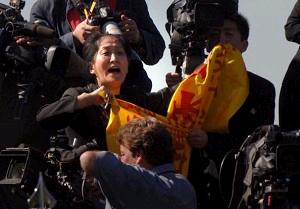 The Epoch Times released this statement later in the day: This morning at the welcoming ceremony for Chinese Communist Party leader Hu Jintao on the White House lawn, Dr. Wenyi Wang stood up and shouted slogans. Dr. Wang attended this event on Epoch Times press credentials. However, her actions this morning were her own. (Epoch)

Dana Milbank and The Washington Post lead the charge today against the administration for the rude protester yesterday during Chinese President Hu’s talk:

China and Its President Greeted by a Host of Indignities

If only the White House hadn’t given press credentials to a Falun Gong activist who five years ago heckled Hu’s predecessor, Jiang Zemin, in Malta. Sure enough, 90 seconds into Hu’s speech on the South Lawn, the woman started shrieking, “President Hu, your days are numbered!” and “President Bush, stop him from killing!”

Bush and Hu looked up, stunned. It took so long to silence her — a full three minutes — that Bush aides began to wonder if the Secret Service’s strategy was to let her scream herself hoarse. The rattled Chinese president haltingly attempted to continue his speech and television coverage went to split screen.

But he wasn’t okay, not really. The protocol-obsessed Chinese leader suffered a day full of indignities — some intentional, others just careless. The visit began with a slight when the official announcer said the band would play the “national anthem of the Republic of China” — the official name of Taiwan. It continued when Vice President Cheney donned sunglasses for the ceremony, and again when Hu, attempting to leave the stage via the wrong staircase, was yanked back by his jacket. Hu looked down at his sleeve to see the president of the United States tugging at it as if redirecting an errant child.

Then there were the intentional slights. China wanted a formal state visit such as Jiang got, but the administration refused, calling it instead an “official” visit. Bush acquiesced to the 21-gun salute but insisted on a luncheon instead of a formal dinner, in the East Room instead of the State Dining Room. Even the visiting country’s flags were missing from the lampposts near the White House.

You have to admit after three minutes of shrieking insults at the President of China, it made you wonder if it were some kind of passive-aggressive Rovian conspiracy. And, you know that Medea Benjamin and Cindy Sheehan are thinking it was a government conspiracy since Dr. Wang was given enough air time to scream herself a headache.

And,… you could have guessed this was coming this morning. The outrage from the Left that someone would dare to interrupt a great communist leader’s speech. What absolutely barbaric behavior!

How dare anyone protest the nation that was just accused this week of harvesting the organs of thousands of executed prisoners a year to sell for transplants.

And, it is strange that we never heard the same outrage from the Left during these protests… 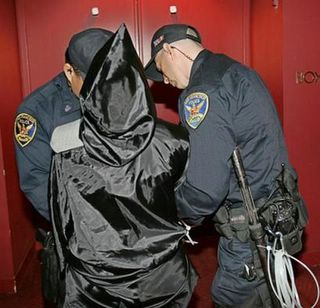 An leftist protester is led out of a talk last year at a Condoleezza Rice speech in San Francisco:

Amid tight security at San Francisco’s Davies Symphony Hall, three women and one man pulled on black hoods and cloaks and stood on their seats, acting out the scene caught in one of the photographs of abuse that undermined U.S. prestige abroad.

Rice initially continued her speech on American foreign policy under President Bush but paused when the protesters shouted “Stop the torture. Stop the killing. U.S. out of Iraq,” as police led them out of the auditorium.

At a Dick Cheney speech in Oregon in September, 2004:

A few minutes into his speech, while Cheney was touting the Bush administration’s record in the Iraq war, an unidentified protester wearing a white T-shirt that said “Pro-Jesus. Bring home the troops now,” started shouting “Stop the war!”

Medea Benjamin, 51, of the peace group Code Pink, said she unveiled a banner near Cheney that read “Be Pro Life, Stop the Killing in Iraq” last night.

Benjamin, of San Francisco, said she borrowed “a friend of a friend’s” floor pass to gain access to the Garden.

She said the veep forced a smile as she yelled, “Mr. Cheney, how much money did Halliburton make in Iraq?”

Another infiltrator at a Cheney speech in September 2004:

Security just removed a protester from the floor, just in front of me. It was a woman and I don’t know her cause, although she was wearing pink.

Where was the outrage from the Left at any of these events?