Powerline has the video of the thugs chasing the Ambassador’s car.

While attending an event with children in Venezuela, Chavista Thugs attacked US Ambassador William Brownfield today in Caracas. 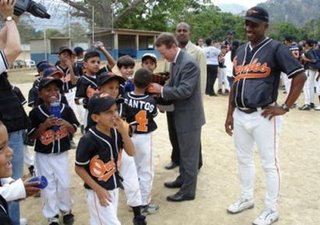 In this image made from television and provided by the U.S. embassy in Caracas, Venezuela, U.S. ambassador William Brownfield talks with young baseball players in Caracas, Venezuela, Friday, April 7, 2006, to whom he handed out bats and other donated equipment. During the event, Brownfield was asked by protesters to leave, supporters of Venezuelan President Hugo Chavez pelted the U.S. ambassador’s car with fruit, vegetables, and eggs, and a group of motorcyclists chased his convoy for miles, at times pounding on the cars, a U.S. Embassy official said. No one was hurt. (AP Photo)

After threats by Chavez supporters on Wednesday, US Ambassador to Venezuela William Brownfield asked the Chavez government to provide improved security. What Brownfield got instead was a pelting with eggs, fruit, vegetables, and a chase by 20 thugs on motorcycles:

The U.S. Embassy in Caracas said Ambassador William Brownfield was ordered to leave the event by a municipal official and his car came under the barrage from protesters as it departed.

“They told them they had no right to be there. As they were leaving, (the cars) went through a gauntlet of eggs and vegetables,” said an embassy spokeswoman.

Supporters of President Hugo Chavez on motorbikes pursued the ambassador’s convoy for 15 minutes as it was leaving a baseball field in a poor Caracas neighborhood where the embassy had donated baseball equipment to a youth club, she said.

The US Ambassador was chased by the thugs who at times pounded on his vehicle. 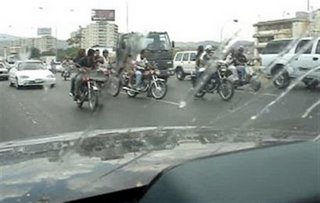 In this image made from television and provided by the U.S. embassy in Caracas, Venezuela, motorcyclists are seen through the embassy’s press car as it chases Ambassador William Brownfield’s car, white vehicle partially out of the frame at far right, after Brownfield was asked by protesters to leave during a visit to a baseball stadium to hand out bats and other donated equipment to a youth league, in Caracas, Friday, April 7, 2006, according to the U.S. Embassy. (AP Photo)

On Wednesday, Ambassador Brownfield was threatened by Chavez supporters in a visit with community leaders:

President Hugo Chávez’ followers, including workers, students and neighbor associations, demonstrated against Brownfield’s visit and demanded him to leave.

Protesters, carrying sticks and stones, showed up at the headquarters of opposition party AD, where Brownfield was meeting with local political leaders.

Chavez is having his own problems this week as massive protests broke out over the brutal deaths of three kidnapped children.