Cynthia McKinney walks off an interview, bad-mouths an aide and then comes back to lecture news staff,
CBS46 (CNN) VIDEO HERE 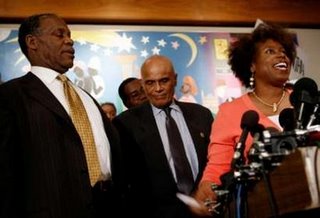 Representative Cynthia McKinney (R) (D-GA) speaks at a news conference with actor Danny Glover (L) and singer Harry Belafonte after she had a close-fisted altercation with a Capitol Hill police officer earlier in the week in Washington March 31, 2006. (REUTERS/Joshua Roberts)

Representative Cynthia McKinney was caught bad mouthing an employee after she walked away from a scheduled interview airing on local Atlanta TV:

Rep. Cynthia McKinney was caught on tape by a television station bad-mouthing a senior staffer after ending an interview with a reporter.

McKinney, who had a run-in with a Capitol-Hill police officer earlier this month, was asked repeated questions about the scuffle. After the interview ended with a WGCL-TV, CBS 46 reporter, a microphone McKinney was wearing picked up comments about her communications director Coz Carson.

When McKinney realized her remarks had been recorded by the microphone, she then returned to face the camera and told the reporter that comments about Carson were off the record.

But the TV station aired the footage Saturday, and CNN later picked it up.

Cynthia became upset during the interview and also lashed out at the local reporter:

The reporter asked if the controversy over the confrontation with the police officer has been a distraction for her.

McKinney told the reporter “You’re a distraction because that seems to be all you want to talk about.”

She then got up and walked out of the interview, still wearing the mike. She is heard saying “You know what? They lied to Coz and Coz is a fool.”

McKinney is running for re-election in the Fourth Congressional District of Georgia as a democrat in the US House of Representatives. 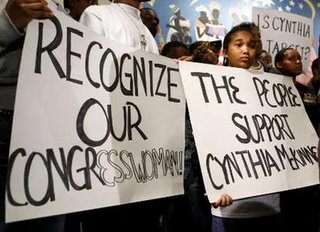 The people came out to support their democrat Representative after she she assaulted a Capital policeman with a closed fist. (Reuters)

World Net Daily has more on this latest McKinney news.