In a central segment of this document it is shown how Iman Ahmed Akkari indirectly threatens the leader of Demokratiske Muslimer Naser Khader. It is proposed that he ought to be killed if he joins the government.

“If he becomes Foreign or Immigration Minister, one should send a couple of guys to blow up both him and the ministry”, says the spokesman for the imams who travelled to the Middle East.

The Danish government may press charges over the threats by Imam Ahmed Akkari to blow up moderate Muslim politician, Naser Khader. 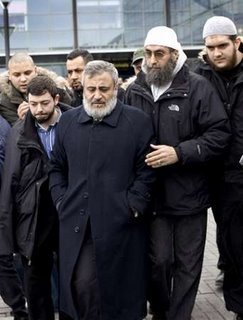 Danish imams Ahmed Akkari (front L) and Abu Laban (3rd R), escorted by their private security, leave Copenhagen Airport March 25, 2006 after attending an Islamic conference in Bahrain. Danish police will launch an investigation into allegations that an imam at the centre of the Prophet Mohammad cartoon row issued death threats against a moderate Muslim politician, a spokesman said on Thursday. A French TV documentary crew secretly filmed Akkari threatening to have Naser Khader — a founder of Denmark’s Democratic Muslims network, which opposes violent protests over cartoons of the Prophet Mohammad — bombed. (REUTERS/Keld Navntoft)

Now, Danish blogger Agora has translated a powerful interview with the moderate Danish Politician Naser Khader. In this interview, Khader explains the constant threat of violence from the terror-linked Imams that he lives under on a daily basis. Naser also shares how bad it is for a Muslim to stand out as a moderate in a world of fatwas:

“Even on a website as harmless as that, I am smeared massively, even by school-children. And that’s my point, that we are dealing with extremist Imams who defer from encouraging violence and terror.

An Imam in the south of Jutland said that those who hate Naser Khader will go to paradise. The Imams do not directly encourage violence and terror – but when they focus their hate on a single person, it can have serious consequences. The same thing happened to Van Gogh – no Imams in the Netherlands said he should be killed. But the organized hatred was so massive that he was made an outlaw and in the end someone killed him independently. 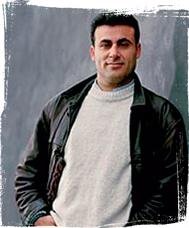 “My niece went to an Arab wedding where several people walked out because she was related to the traitor. My nephew was apprenticed to a Pakistani mechanic – when he found out I was his uncle, he was fired. My mother receives calls from the Middle East where she is told what will be done to me and the family.”

“But I am my own best advisor, because I have a project for life now and that is to fight those intolerant Islamists. I am so tired of them -they and their big beards make me want to vomit and then they issue a fatwa that you can’t shave. Many of the refugees from Iran fled those things – and then we have to face it here again. Their goal is to impose Sharia on Moslems in the West. And the motto of the Salafists is – and in Arabic it sounds almost poetic: Allah is our goal, the Koran is our law, Jihad is our way and death as a martyr our highest aspiration. That’s the motto and that’s why they need to be fought to last fucking Democrat.”

Agora has translated this shocking interview and has much more news from Denmark.

But, this is not an isolated event for moderate Muslims living in Europe. On Sunday, Britain’s Foreign Secretary Jack Straw and U.S. Secretary of State Condoleezza Rice met with Muslim leaders in Great Britain. This is what they were told:

Although the names of the 21 Muslim leaders had been made public, several of them requested that their names not be published or broadcast, for fear of repercussions. Five who agreed to be interviewed clearly feared they might be viewed as traitors.

It is strange to think that these moderate Muslims live under this threat not just in places like Pakistan or Jordan, but right here in the West. These threats of violence by the radical Islamists must be confronted. There has to be more done to protect and uplift the moderates of Islam. And, Islam has to begin to take a look at itself and its culture of violence.