The sourpusses at the New York Times had to scramble to find a negative retention headline today since the Army is surpassing the year’s retention goal by 15%!

Two of every three eligible soldiers continue to re-enlist, putting the Army, which has endured most of the fighting in Iraq, ahead of its annual goal.

The Army was 15% ahead of its re-enlistment goal of 34,668 for the first six months of fiscal year 2006, which ended March 31. More than 39,900 soldiers had re-enlisted, according to figures scheduled to be released today by the Army.

The Army fell 8% short of its goal of recruiting 80,000 soldiers in the fiscal year that ended Sept. 30, although it is exceeding its goal this year.

The Army has met or exceeded its goals for retention for the past five years, records show. It was 8% over its goal for 2005, and 7% ahead of its targets for 2004. The number of re-enlistments has exceeded the Army’s goal by a larger margin each year since 2001.

Anticipating this news, the New York Times scrambled to come up with this “strong and smart” negative story by deadline:

Really? That’s an odd way to headline a report based on this trend: 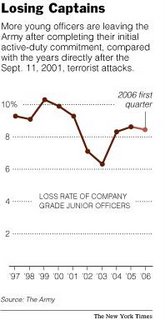 Never mind that the trend shows young officers are staying in the service at a rate much higher than when Bill Clinton was president. Never mind that there was improvement this quarter… It still screams “quagmire!” at the Times.

Without the graph, it was a decent try. But, this paragraph from the NY Times article pretty much blew their story:

Since the invasion of Iraq in 2003, the Army has had a far more difficult time in its recruiting than the other services because the ground forces are carrying the heaviest burden of deployments — and injuries and deaths — in the war.

Really? They must have missed the news today that the recruitments are up.

Keep sucking those lemons! Who said sales are slacking? Stay committed to the cause!