…Don’t forget about the tax and spend liberals.

Here is a good reminder. 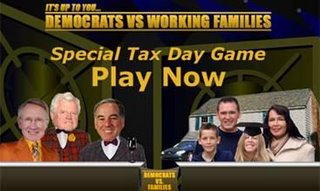 Click HERE and it will bring you to the tax game.

We all know about how the Bush tax cuts have created a boom in the economy. Here is more on that good news:

America’s Economy Is Strong And Growing Stronger. Last year, the economy grew at a healthy 3.5 percent rate – faster than any other major industrialized country. Since August 2003, we have added more than 5.1 million new jobs – more than Japan and the European Union combined. The unemployment rate is at 4.7 percent – lower than the average of the 1960s, 1970s, 1980s, and 1990s.

Failing To Extend The Tax Cuts Would Result In A Nearly $2.4 Trillion Tax Increase Over The Next 10 Years On American Taxpayers (2007-2016). (Office Of Tax Policy, U.S. Department Of The Treasury)

And, here is a good link to find out more on the strong state of our economy. More Here

Be reminded of this as Bush tries to make his tax cuts permanent in the coming days!