The only question they leave for the reader is Why aren’t they in jail, yet? 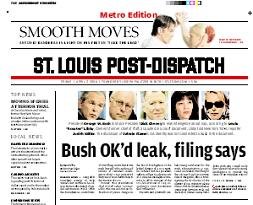 The Post Dispatch lines up the players in their twisted version of truth.

Long after President George W. Bush warned that anyone in his administration who leaked classified information would suffer the consequences, a new federal court filing asserts that it was Bush himself who authorized release of classified intelligence about Iraq’s purported weapons of mass destruction in the summer of 2003.

Former vice presidential chief of staff Lewis “Scooter” Libby, who was indicted on obstruction of justice charges in the broad investigation of the leaked identity of a CIA agent, has testified that the president authorized him to release parts of a National Intelligence Estimate to offset criticism of the U.S.-led invasion of Iraq, according to court documents filed Wednesday.

The new and potentially embarrassing revelation for the Bush administration is contained in a federal court filing by the Chicago-based prosecutor, Patrick Fitzgerald, who is investigating the disclosure of the identity of CIA operative Valerie Plame. That document makes no connection between Bush and the leak of Plame’s name, but it draws Bush into a small circle that released selected national intelligence to counter the claims of an outspoken critic of the war.

The president had the legal authority to declassify information by releasing it, a government authority and outside experts say, but the alleged episode raises a more pressing political problem. It has increased demands for the White House – which was refusing to comment on the investigation Thursday – to publicly address a conflict between Bush’s criticism of leaks and his own alleged leaking.

Here are a couple of things the Post Dispatch refused to report (via Powerline):

In the summer of 2003, White House officials including Libby were frustrated that the media were incorrectly reporting that Cheney had sent Wilson to Niger and had received a report of his findings in Africa before the war in Iraq had begun.

In an effort to counter those reports, Libby and other White House officials sought information from the CIA regarding Wilson and how his trip to Niger came about, according to court records.

“This is a very significant disclosure. This is big,” said Rep. Ray LaHood, R-Ill., a Bush ally who refrained from commenting on Libby’s testimony but maintained that the White House will be compelled to comment. “They’re going to have to comment on it. They owe all of us an explanation, all of us who trust him, and they owe the American people an explanation.”

In a midterm election year, Democrats are speaking out more forcefully.

“If Mr. Libby’s claims are true, they represent a catastrophic breach of the public trust,” said Sen. Robert Menendez, D-N.J. “It’s OK for the Bush administration to release classified documents that compromise national security when it suits their political purposes.”

Plame’s husband, former Ambassador Joseph Wilson, had traveled to Niger to investigate claims that Iraq was trying to buy uranium there for nuclear weapons. After debunking that claim, which was among the assertions that the president had made in his rationale for the invasion of Iraq in 2003, Wilson wrote an op-ed article for The New York Times on July 6, 2003, criticizing the flawed intelligence that the administration had cited in taking the nation to war.

That is such a joke! How many times has Joe Wilson been shown to be a liar?

This is just one report from the Weekly Standard:

As has been shown countless times, no substantive part of Wilson’s story was true. A bipartisan Senate Intelligence Report made this clear in July 2004 (see, for example, here and here.)

But facts don’t matter to the mainstream media and the Post Dispatch.

It is all about bringing down Bush, any way possible.