The Mother of the Tel Aviv suicide bomber says, “It was necessary,”
BBC VIDEO HERE.

Her son blew himself up and killed 9 Isrealis at a fast food restaurant. 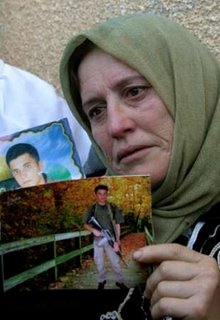 The mother of Sami Salim Hamad, a Palestinian militant from Islamic Jihad, holds his picture outside the family’s home in the West Bank village of Arakah, near Jenin, April 17, 2006. An Arab television station aired a video tape showing Hamad and said he carried out the Tel Aviv, Israel suicide bombing attack on April 17, 2006. Family members said Hamad worked as a waiter in Jenin and told his employer on Sunday he would not be coming back to work. (REUTERS/Mohamad Torokman)

His father has been arrested by the Israeli police. 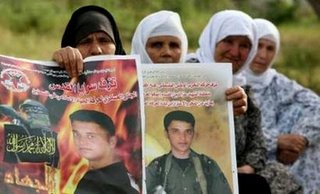 Several armed factions of Palestinian militants demanded that President Abbas apologize for harm done to the people… for apologyzing for the attacks.

The Hamas Terrorist Group, who leads the Palestinian government of Gaza, said “the resistance” is a legal and natural reaction to the Israeli crimes.”

Sugiero has more on the death cult’s indoctrination.