“I am out here because it’s an infringement of our rights to take away ‘both races’ flags.”

Since when is the American Flag a Caucasian Flag? Is that what they’re teaching the children at Skyline High School? 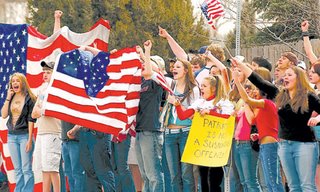 On Friday, Skyline High School decided to ban Old Glory because it had become a a “symbol of antagonism”. Today there are more reports from Skyline High:

On Monday, nearly 200 students from Skyline, Longmont and Niwot high schools demonstrated at Sixth Avenue and Main Street in Longmont to protest immigration reforms being debated in Congress. On Wednesday, an estimated 200 students left Niwot High for a rally to protest the proposed legislation in the U.S. House.

Backlash from the demonstrations spilled over at Skyline later in the week, where at least two students were suspended following incidents involving racial epithets and flag waving.

As students gathered across the street from the school Friday, the last day of classes before spring break, Skyline principal Tom Stumpf acknowledged ethnic tensions have been elevated at the school as a result of the original protest.

Josh Nelson, 17, said he attended the rally because police officers made him remove an American flag that was draped over the hood of his truck Friday. He said they also searched his vehicle, which was on school grounds.

“I couldn’t even have the flag on my dashboard,” Nelson said.

Justin Marshall, 17, said he was wearing a red, white and blue T-shirt featuring a picture of a Ford Mustang with an American flag behind it.

“They told me I was being agitative by wearing it,” he said.

Now, another case of banning of the US Flag is reported at a middle school in California:

Flaunting the American flag is precisely what 13-year-old Cameron Miles did at Ranchero Middle School on Friday.

Wearing two shirts, one with the American flag, school officials said he removed the one displaying his patriotism and began waving it at a group of Hispanic students on campus.

“His friends began to hoist him on their shoulders so he could be more predominately displayed when the proctor asked him to give her the shirt,” district spokeswoman Debbie Baker said. “She explained that he can’t incite an already sensitive situation and he told her, ‘This is bullshit’ and ran.”

Schroeder said she was never told by school officials her son had removed his patriotic shirt. She said he was told the shirt needed to be confiscated because him simply wearing it on campus could incite violence.

“My son just wanted to show his classmates that he had pride for his country. Why is this a symbol that incites violence but the Mexican flag is not? “Schroeder asked. “My brother is in the Navy. We’ve been wearing patriotic shirts for years. Ranchero’s colors are even red and white. Where are we going to draw the line with what they can and cannot wear?”

Another student in Jarupa, California was suspended for organizing a Pro-America, Pro-HR4437 rally!

Another report states that on Monday a Jurupa Valley High School senior started organizing a pro-America rally. The event would include the waving of the American flag to help demonstrate support for HR 4377 bill.

The organizer, 17-year-old Josh Denhalter, was suspended March 30, for handing out some 300 fliers to promote the rally.

A proud Mexican-American reported his car vandalized this past week in Victorville:

Also on Friday, 17-year old David Guzman of Victorville left his job at the Victor Valley Mall and discovered all his patriotic flags and ribbons once proudly displayed on his car were stolen and the car’s antennae was broken in half where a small U.S. flag hung just hours earlier.

“I don’t know who did it or why. But I’ve had them on my car since 9/11 and it wasn’t until now that anyone messed with them. I’m Mexican. All of this is embarrassing to me and my family,” Guzman said of the nationwide protests. “I don’t want people looking at me or my sister like we’re one of those idiots protesting for a getout-of-jail-free card.”

And the banning of flags continues…

A Western Kentucky town has banned the Confederate flag from their local Tater Day celebrations.

TigerHawk is wondering if this is really what we want to teach our children about political activism.

And, The Futurist may have discovered the real reason for the porous US borders.