The 10 Commandment-Less Party continues to find that “Bearing False Witness” (#9) is working just fine for a troubled party wandering purposeless in a desert without the manna of public office and lacking ideas for today’s troubled world.

(“We will catch Osama bin Laden” does not count.)

But, today after the Third Court of Appeals said no to Ronnie Earle’s abuse of power, the Liberal Culture of Personal Destruction & Corruption must realize it’s time to get the licks in before their Delay gig is up. 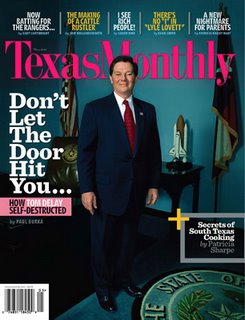 Rushing to print, the liberals get their Delay Texas Monthly cover out before he is cleared of all charges.

The Texas Monthly acts wisely and gets their Personal Attack Cover Story on the indicted and not convicted (except in the press) Tom Delay.

Interesting enough, in this article the Democrats fess up to the strategy they know best… personal destruction:

Nicknamed the Hammer for his mastery of the dark arts of persuasion, the man who had arguably been the most powerful figure in Congress for a decade had taken so many hits from Democrats and the media, and faced so many perils for so long, that what’s amazing is not that he fell but that he survived as long as he did…

This is the point in the eulogy where we say of the dearly departed scoundrel, “No one really knew him.” And outside the Beltway, it’s true. A feeding frenzy engulfed DeLay with such intensity that the public came to regard him as a cartoon character: a one-dimensional caricature of the corrupt, devil-may-care pol. They saw him as a crook. A cheat. A right-wing fanatic whose motivation never changed…

Campbell knew, as I did, that it is almost impossible to beat an entrenched officeholder in a congressional race. “You don’t beat an incumbent,” he told me. “He falls of his own weight.” But in a less than obvious way, Campbell did beat DeLay. He beat him just by getting in the race, by putting a national spotlight on DeLay’s troubles at home. He beat him by making sure that DeLay’s character would be laid before the voters,

The article is really not worth your time but if you’d like to read it all Here is the link.

Sad that since the liberals can’t win with higher taxes, weak defense, partial birth abortion, atheism, and socialism, they are forced to spit out personal attacks, even on their own molesters.

Jim Hoft
Jim Hoft is the founder and editor of The Gateway Pundit, one of the top conservative news outlets in America. Jim was awarded the Reed Irvine Accuracy in Media Award in 2013 and is the proud recipient of the Breitbart Award for Excellence in Online Journalism from the Americans for Prosperity Foundation in May 2016.
Apple Labels Police as Terrorists in Latest Update to Siri -- You Can Try It Yourself!
BREAKING: Burisma Investigation to be Released within 24 Hours -- FINDS BIDEN FAMILY GUILTY LIKELY CRIMINAL ACTIONS (VIDEO)
Let's Make Her Famous! Violent, Foul-Mouthed Leftist Caught on Video Ripping Down Trump Sign in Castle Rock, Colorado
Karma's a Bitch -- Angry Woman Driver Screaming at Trump Supporters and Flipping the Bird Rear-Ends Car in Front of Police (VIDEO)
Obamagate the Movie Is Being Censored by Twitter -- China-Like Censorship in US During an Election -- Where Is the GOP?
See more...