Lining up for picture time in Gaza. 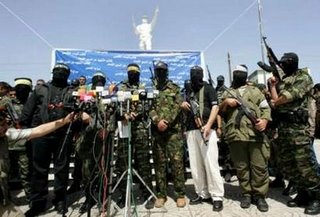 Palestinian militants take part in front of the Unknown Soldier square during a news conference in Gaza April 19, 2006. Hamas denied accusations by Jordan that the Islamic militant group had stored weapons on its territory and said it regretted Amman’s cancellation of a visit by the Palestinian foreign minister. (REUTERS/Mohammed Salem)

Hamas and Jordan relations took a turn for the worse after Jordan discovered that Hamas is storing weapons within the Jordanian border:

Mahmud al-Zahar had been due in Amman on Wednesday as part of a regional tour to raise funds for the Palestinian Authority, which is facing a massive financial crisis after a cut in vital Western funding.

But Jordanian government spokesman Nasser Jawdeh said the visit was postponed until further notice “following the discovery of weapons, explosives and rockets in the hands of a Hamas group in Jordan.”

Zahar roundly denied that Hamas hid arms in any Arab country but played down the impact of the cancellation of his visit on relations with a key broker in the Middle East peace process.

A Jordanian official voiced concern the suspected Hamas cell was planning “terrorist activities” in the kingdom, a close US ally that is also only the second Arab country after Egypt to have signed a peace treaty with Israel.

Jordan is discovering that Hamas is turning out to not make the best of neighbors. 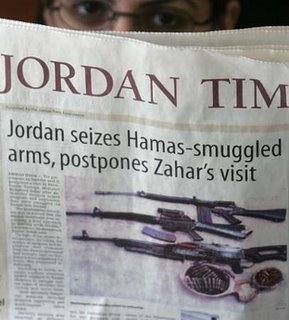 A Jordanian woman reads a newspaper in Amman, Jordan, April 19, 2006. Jordan accused Hamas on Wednesday of storing arms on its territory and cancelled a visit by the foreign minister of the new Palestinian government led by the Islamic militant group. (REUTERS/Ali Jarekji)

Also, today Hamas Premier Ismail Haniya said that “Dignity is more important than dollars”. My word! They must really be hurting. I could be wrong but I can’t imagine that the garbage collecters much agree with him.