The Iraqi Youth Soccer Team was “Hotter than a Texas Summer” at the International Dallas Cup,
WONDERFUL VIDEO HERE

Their play was “smoking hot” at the Dallas Cup! 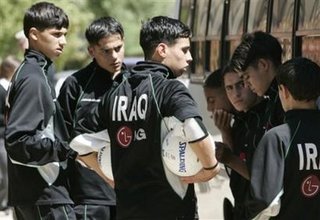 The Iraqi Youth Soccer Team won the hearts of the fans at the International Dallas Cup Soccer Tournament. Here they are pictured at their arrival to the United States. (AP Photo/Donna McWilliam)

The Iraqi Youth Soccer Team got a chance in a lifetime as they were sponsored by a Texas oilman to come play in the prestigious International Dallas Cup. They quickly became the favorites for the Texas fans:

For Dallas soccer mom Tammie Barnes, mornings have been a lot busier recently. On the agenda, boiled eggs and tea, phone calls to Baghdad — and lots of bike riding. “They’re riding bikes,” says husband Greg Barnes, “to the point that you’ve got to go out and get them to leave.”

But these Iraqi teens didn’t come 7,000 just to pedal. They came to play in the prestigious International Dallas Cup soccer tournament. The team was made up of 18 kids from oil-rich Kurdish towns and insurgent-laden provinces, where back home, just practicing can be a game of life or death.

In the safety of Dallas suburbs, the Iraqi team started off hotter than a Texas summer, outscoring opponents 16-2.

“I think it’s important that we have the young of tomorrow in America and also in Iraq and other countries know each other,” Huddleston, who sponsored the kids, says.

In the Barnes house, it worked. In less than a week, their three house guests became more than just friends.

“They’ve become part of our family, very much so,” says Tammie Barnes. “I don’t want them to go home.”

On the soccer field, the Iraqis were the fan favorites. But pride and passion weren’t enough. Their dream of winning the tournament died in the quarterfinals, when a team from Cobb County, Ga., beat them by one goal.

“They came over here full of hope, since their country is at war — the gunfire days and nights,” says Ayman Al-Kurd, a fan. “They wanted to go back with something to make the people happy … make their parents proud of them.”

That something may not be a trophy … but it is a prize that may be worth a little more. And on Tuesday, they’ll visit the White House. 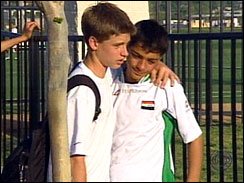 One of the Iraqi players gets a hug from an American friend after losing the quarterfinal game in the prestigious Dallas Cup Soccer Tournament. (CBS)