Iraqi Shia pick a candidate for Prime Minister.
Sunni and Kurdish politicians signal they will accept the nominee.

This clears the way for Iraqi elections for top leadership positions tomorrow! 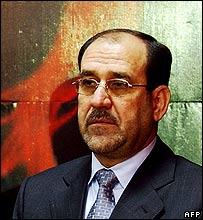 Iraq’s largest parliamentary bloc, the Shia United Iraq Alliance (UIA), has nominated Jawad al-Maliki as its choice for the post of prime minister.
The decision came a day after the Shias’ first choice, Ibrahim Jaafari, agreed to step down.

The main Sunni coalition, the Iraqi Accord Front, has shown initial agreement with Mr Maliki’s nomination, a spokesman said.

Mr Maliki has also not been opposed by any of the outside powers who are influential here, says the BBC’s Jim Muir in Baghdad.

Disagreement over the new prime minister has held up the formation of a new government, months after elections.

Sunni and Kurdish politicians have already said they would accept Al Maliki:

Sunni and Kurdish politicians signaled they would accept al-Maliki — a close ally of al-Jaafari in the Shiite Dawa Party — clearing the way for parliament on Saturday to elect top leadership positions, including the president, and launch the process of putting together a government.

Publius Pundit has thoughts on the latest developments (via Instapundit).

Omar at Iraq the Model says he would be surprised if the competing parties accept Al-Maliki.

Juan Cole has put together a collection of interesting documents on Al-Maliki.

Previously:
A Crack in Quagmire! Al-Jaafari Agrees to Step Aside