French students were eager to display their skills at today’s job law protests in France. 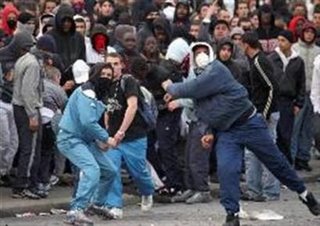 Masked youths throw stones during clashes with police at the end of a protest demanding the government scrap the First Job Contract (CPE) in Paris April 4, 2006. (Jacky Naegelen/Reuters)

Students are taught to break down barriers that prevent them from reaching their goal. 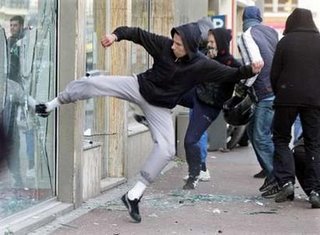 Protestors smash shop windows during a student demonstration against the First Job Contract (CPE) in Lille, northern France, April 4, 2006. French transport workers and teachers staged new strikes on Tuesday and students across the country gathered for street protests they hope will kill off the disputed CPE, a youth hire-and-fire law. (REUTERS/Jean-Pierre Rafto)

When stressed, a bit of time away from work may be best until things cool down. 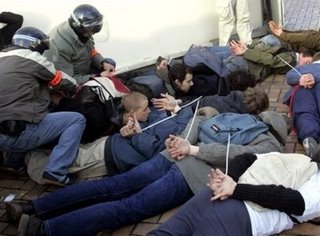 Valuing diversity is important. Here these young men display their learnings as they snatch this young girl’s purse at the protest today. 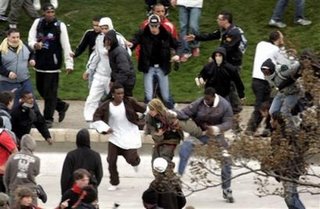 Protesters clash with each other after a demonstration in Paris, Tuesday April 4, 2006. Police said at least 1 million people poured into the streets across France on Tuesday and youths clashed with riot officers in the latest protests against the government’s new jobs law. (AP Photo/Christophe Ena)

Maybe the protesters could help out in Venezuela…

Gina Cobb also notices the fine job they are doing with their education system in France.