It was only a matter of time…

The kids did not care for the new plan… 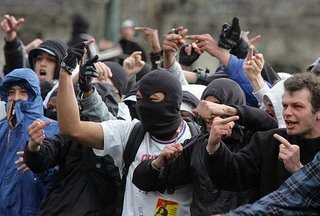 It had to go. They were forced to take their fight to the streets. (France-Echos)

After putting up a brave fight, France surrendered today to the young socialist thugs on the street. Details of the surrender will be announced shortly. 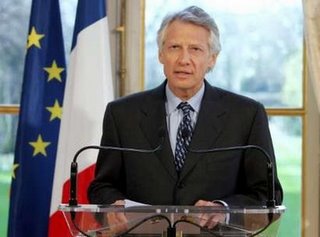 France’s Prime Minister Dominique de Villepin gives a speech at his Hotel Matignon offices in Paris April 10, 2006 after a decision by French President Jacques Chirac to scrap planned youth job contract CPE that has provoked weeks of protests and a political crisis. Villepin, who has championed the job law, said in the televised statement he regretted that events had shown the contract could not be applied. (REUTERS/Jack Guez)

Besides the rioting and torchings, the students raided the Sorbonne and destroyed several of the ancient and rare books from the library. 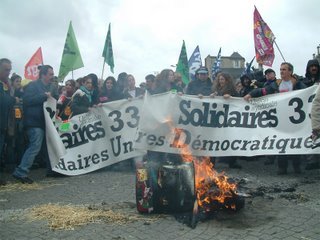 At least six rooms were sacked, five offices of the National School of Chartres looted, two lecture-halls and all the cafeterias were destroyed, three other rooms were devastated, and forty rare books were mutilated or torched at the Sorbonne. (Via Galliawatch)

French President Jacques Chirac announced that France would scrap its planned youth job contract CPE that allowed companies to fire workers up to two years into their employment:

The announcement was aimed at ending a political crisis for the government of Prime Minister Dominique de Villepin because of opposition to the First Job Contract (CPE). Villepin has been closely linked to the CPE and damaged by the controversy.

“The president of the republic has decided to replace article 8 of the equal opportunities law with measures to help disadvantaged young people find work,” said a statement from the presidency.

Changes to the law would have to address the problem of youth unemployment, which stands at 22 percent, quell the protests and also find a way of saving face for Villepin who has championed the law, commentators said.

Chirac met Villepin and other senior members of the ruling UMP party on Monday in a bid to find solutions after days of intensive negotiations with union leaders and students.

It was not clear whether student and union leaders pressing for the complete withdrawal of the contract would be placated.

The protests and a perception that Villepin has been unresponsive to voter sentiment over the contract has damaged the popularity of the prime minister and his hopes of becoming the ruling party’s candidate for presidential elections in 2007.

Villepin was due to announce details of the new measures at a news conference shortly.

Newspapers on Monday said any changes would probably include subsidising employers to hire young people with the aim of giving the worst-off access to the labour market.

The most disadvantaged young people are those aged between 18 and 25 who have left school without any qualifications and who are unemployed. France’s youth unemployment rate stands at 22 percent.

The “easy hire, easy fire” law allows firms to fire workers under 26 without giving a reason during a two-year trial period but it has proved highly unpopular.

Students were planning fresh protest marches on Tuesday and several hundred marched through Paris on Sunday to demand that classes resume and students end a blockade that has brought many high schools and universities to a standstill.

Bruno Julliard of student union UNEF now looks to “Maintain the pressure” after this “first victory”. 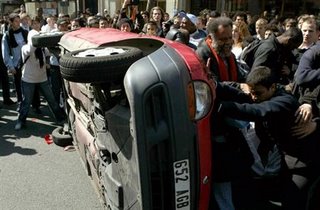 A crowd overturns a car after it ploughed into student demonstrators in Paris April 7, 2006, injuring at least one. On April 9, French unions threatened to extend protests against a youth job contract unless President Jacques Chirac provides a clear solution to a crisis. (REUTERS/Charles Platiau)

De Villipin says his goal now is to work for the future of the country.

It took a concerted effort to create awareness. 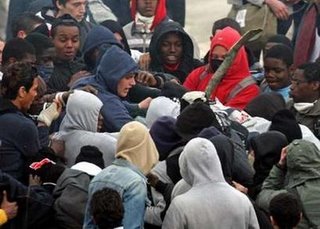 Employers can look forward to hiring this enthusiastic graduating class. (Via Galliawatch)

No Pasaran! has updates on the collapse today.