The fire broke out at 4:00 AM Thursday morning at a development in South St. Louis,
KMOV Video HERE

Local radio greats Allman & Smash at 97.1 FM reported this morning that the radical environmental group, The Earth Liberation Front, is a suspect in the fire.

KMOX is reporting, “Michelle Duffe, one of the developers — tells KMOX News a neighbor heard people cheering outside the building as the fire began. Duffe says she’s been told by police that a group called “ELF”, the Enviornmental Liberation Front, has been burning new buildings in California and elsewhere.”

Arson is suspected as the cause of the blaze. 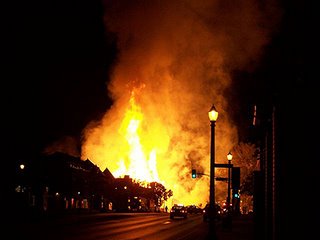 Residents heard a series of explosions, now Federal agents from the Bureau of Alcohol, Fire Tobacco and Explosives are investigating. (KSDK)

The Leftist group Earth Liberation Front is a suspect in a huge fire on a housing development that lit up the skies in south St. Louis on Thursday morning:

Flames from leaping from the three-story structure lit up the predawn sky and could be seen for miles. The intense heat melted nearby streetlights, signs, windows and car bumpers to melt. The fire closed down South Grand for several hours.

Authorities say it was the incredible heat generated by the massive flames that hampered efforts to knock down the fire. Fire officials estimate the heat from the fire may have approached 1,000 degrees.

The lead in the stained glass windows on a house across the street melted, and the flames sparked a fire in the home’s third floor bathroom. The fire spread to Larry Pratt’s home next door and started his third floor dormer window on fire.

Pratt says the brick walls in his home are a foot and a half thick but he could feel the heat inside his house.

There are no reports of injuries.

The cause of the fire is under investigation. Officials say that there was no electrical service to the building. 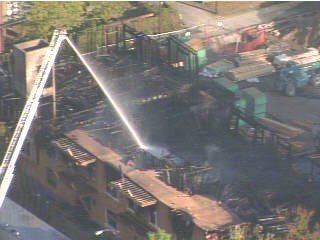 A St. Louis bomb expert says the blaze went up to fast:

“It went up too fast,” said St. Louis Police bombing and arson Detective Richie Williams. “The way it spread so quickly would indicate that an accelerant was used – but we’ve got no hard evidence at this point.”

The fire erupted about 4 a.m. Thursday at the Compton Gates Condominium development, at 2201 South Grand at Flad Avenue, causing an estimated $3 million in damages to the $10 million project. The development sits at the east end of the Shaw Neighborhood, one of the preservation success stories on the city’s South Side.

Update: (Friday AM) I talked with Michelle Duffe, one of the developers with Compton Gates Condominiums and this is what I was told:

Michelle had talked with a detective from the Police Department who said that the ELF had recently been passing out flyers in the neighborhood. The Sprinkler’s Union is another group that they are looking at. The Feds have brought in dogs to search the scene of the fire that they strongly suspect is a result of arson.

Three different neighbors had heard Boom-Boom-Boom right before the fire started. One of the neighbors said that they heard cheering after the explosion noises.

I will update this post as I find out more about this fire.