Bill Cosby told residents of the Big Easy that Mayor Nagin’s “Chocolate City” is in need of a massive cleanup.

And, he wasn’t talking about the rotting debris! 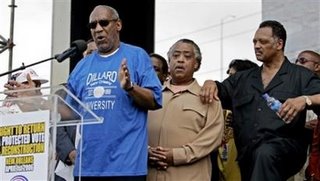 Entertainer Bill Cosby, left speaks at a rally in New Orleans Saturday April 1, 2006. The rally is being held at the convention center where evacuees from Hurricane Katrina gathered without food or water shortly after the storm flooded the city. The protesters are seeking attention for disenfranchised evacuees and is being led by the Rev. Jesse Jackson. Joining Cosby is Al Sharpton, center, and the Rev. Jesse Jackson. (AP Photo/Alex Brandon)

Bill Cosby today told blacks in New Orleans not to rebuild the city like it was before the hurricane:

Cosby, whose criticism of some aspects of modern African-American culture has stirred controversy in recent years, told a rally headed by black leaders that the city needed to look at the “wound” it had before Katrina struck.

“It’s painful, but we can’t cleanse ourselves unless we look at the wound,” Cosby told the rally of about 2,000 people in front of the city’s convention center.

“What kind of a village is that?”

Sadly, it looks like Coz has lost Al Sharpton at this point in the speech. 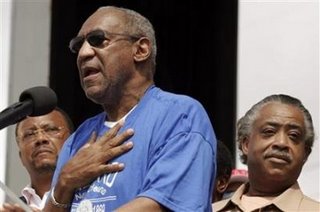 Before Katrina killed more than 1,300 people and displaced hundreds of thousands, New Orleans had nearly half a million residents, 70 percent of them black. An estimated 30 percent of the city had incomes below the poverty line.

Less than half the population has returned to the heavily damaged city and evacuees remain scattered across the country. Many of those who have come back are whites who lived in affluent areas that were less affected by flooding.

Other speakers, including civil rights activists Jesse Jackson and Al Sharpton, denounced what they said was an attempt by state and federal officials to disenfranchise the evacuees in April 22 local elections by not setting up out-of-state voting stations.

Unfortunately, New Orleans is not the only city suffering. Since Hurricane Katrina evacuees were relocated to Houston, the crime rate has increased 32% since last year and 35 murders in Houston have been related to Katrina evacuees.

Mayor Nagin, the controversial leader of New Orleans, is facing 21 challengers in his re-election bid on April 22nd. Since his “Chocolate City” remarks, only 9 percent of whites said Nagin would get their vote come April, and 56 percent said he definitely will not.

On a lighter note, Fats Domino returned home to his lower 9th Ward home this weekend for a visit. His home is expected to be refurbished in the next 90 days.