After Condoleezza Rice and Jack Straw spent the weekend together in Great Britain, where the Condi effect took over, they took a ride to Baghdad to persuade the politicians to move forward with the Iraqi Government formation. 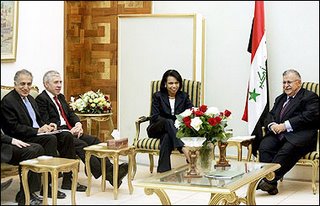 (From L to R) US. ambassador to Iraq Zalmay Khalilzad, British Foreign Secretary Jack Straw and US Secretary of State Condoleezza Rice meet Iraqi president Jalal Talabani in Baghdad. Rice and Straw made a surprise visit to Iraq to register growing impatience with months of squabbling that has blocked the formation of a new government.(AFP/Pool/Ali Haider)

After her special invitation to Great Britain where she wooed the crowds, Condoleezza Rice and Jack Straw flew to Baghdad to hold talks with the struggling government figures:

Rice and Straw, who had been in northern England, arrived during a driving rain and thunderstorm at a time when US officials here have been expressing increasing impatience with the slow pace of government talks following the Dec. 15 elections.

US Ambassador Zalmay Khalilzad has urged the Iraqis to speed up the process to prevent the country from sliding into civil war.

“The terrorists are seeking to provoke sectarian war, and Iraq needs a government of national unity in the face of this threat,” Khalilzad said in a statement released Saturday.

“This government needs to have a good program to govern from the center, and needs good ministers who are competent. Iraq is bleeding while they are moving at a very slow pace,” he added.

US officials believe formation of a government of national unity would be a major step toward calming the insurgency and restoring order three years after the US-led invasion toppled Saddam Hussein. That would enable the US and its coalition partners to begin withdrawing troops.

Meanwhile, as the Democrat’s Civil War rages on… 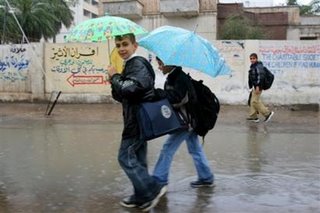 Iraqi boys walk home from school on a rare rainy day in Baghdad, Iraq Sunday April 2, 2006. US Secretary of State Condoleezza Rice and British Foreign Secretary Jack Straw made a surprise visit to press Iraqi politicians to speed up the formation of the government, which many see as key to stemming rising violence.(AP Photo/Karim Kadim) 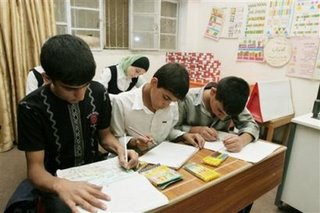 Iraqi students study at a school for disabled children Sunday April 2, 2006 in Baghdad, Iraq. US Secretary of State Condoleezza Rice and British Foreign Secretary Jack Straw made a surprise visit to press Iraqi politicians to speed up the formation of the government, which many see as key to stemming rising violence and building a civil society.(AP Photo/Karim Kadim)