British Muslim Leaders Admit They are Terrified of… Muslims!

This blatant Islamophobia is just wrong!

British Muslim Leaders went to meet Condoleezza Rice, but please don’t tell their flock at the mosque, they don’t want to be a target for violence! 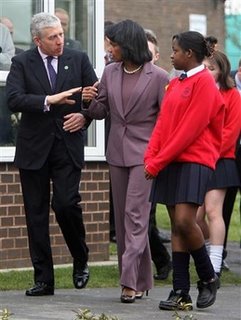 Britain’s Foreign Secretary Jack Straw (L) speaks with U.S. Secretary of State Condoleezza Rice (C) during a visit to Pleckgate High school in Blackburn, northern England, March 31, 2006. Rice was met by a protest of angry muslims and anti-war activists on Friday on the first day of a visit to northern England with Straw. (Darren Staples/Reuters)

Joel Brinkley from the New York Times thinks that the 250 protesters, a couple of negative Islamic leaders, and a liberal mayor has made Condoleezza’s trip to Britain an “embarrassing raucous, mishap-ridden gantlet.”

The fact that Muslim leaders were so terrified that their community would find out they were with Condi for fear of violence or death from their community is completely missed:

About 250 protesters ringing Blackburn’s City Hall shouted “Shame on you” as the two arrived. Through the din, Ms. Rice looked off into the distance and spotted a handful of people, many holding shopping bags, who had stopped to gawk.

She pointed them out to Mr. Snow, and the two of them waved enthusiastically. Later, Mr. Straw said this gathering of “people who agree with the visit” was “at least as large as the protesters.”

In a news conference, Ms. Rice said she was “enjoying this visit very much.” She described the meeting with the Muslim leaders as “immensely stimulating and interesting.”

Although the names of the 21 Muslim leaders had been made public, several of them requested that their names not be published or broadcast, for fear of repercussions. Five who agreed to be interviewed clearly feared they might be viewed as traitors.

Hmm. There’s an elephant in a burka but the New York Times would rather focus on the protester in the cage! 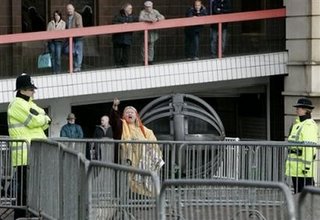 It is interesting how the Brits from The Telegraph view Condi’s visit compared to Joel Brinkley from the NYT (via Michelle Malkin):

A few hours earlier, Mr Armstrong had been declaiming the war in Iraq in forceful tones in front of the nation’s media. Now, he appears to have undergone a quasi-religious conversion. But you can’t blame him. This, it seems, is quite simply the Condi effect….

Hundreds marched to Blackburn town hall dressed in orange boiler suits and screamed at her as she arrived for a press conference. Yet Ms Rice greeted it all with a red-lipsticked smile and a heady wallop of fragrance that seems to have left grown men powerless in her wake.

In her presence, the normally buttoned-up Mr Straw alternated between looking like a proud father bringing his daughter into the office for work experience and an adolescent schoolboy with a hopeless crush on the head girl….

Over the past week, male journalists have written lyrically about her “lacquered hair” and her well-tailored trouser suits: a pretty mauve number for her first date with the Foreign Secretary on Friday and a more sober black outfit for yesterday.

It was pointed out that her name was derived from a musical expression: con dolcezza, meaning “with sweetness”. Even her appearance on BBC Radio 4’s Today programme, normally the bloodiest of gladiatorial arenas for unpopular politicians, was marked by a curious – and unusually lengthy – tenderness….

“I was against the war, but I think she’s wonderful,” gushed Stephen Walsh, 47, a human resources consultant, who had wrestled himself to the front of the security cordon outside Blackburn town hall in the hope of catching a glimpse.

That kind of puts things in perspective, doesn’t it? It makes you wonder if there is anything that would have pleased the NYT.

And, the biggest news from Condi’s trip to England may have been her comments on shifting American policy. The comments were reported by Bloomberg:

U.S. Secretary of State Condoleezza Rice said the U.S. will no longer give explicit support to governments that are not elected, suggesting that spreading democracy now takes priority over maintaining political stability.

“The past 60 years of trying to buy stability at the expense of democracy is now gone,” Rice said at a press conference in Blackburn, England, that was televised by the British Broadcasting Corp.