The Former Democratic Senator says… “There is nothing left for them to do except to commit acts of terrorism.” Unbelievable! 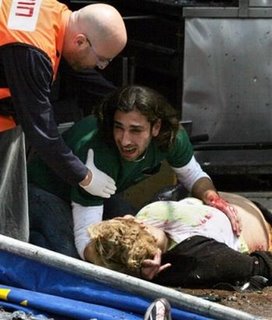 A man reacts as he holds a victim of a suicide bomb attack near a fast-food restaurant in Tel Aviv on Monday, April 17, 2006. A Palestinian blew himself up in a bustling commercial area of the city during the Jewish holiday of Passover, killing at least seven people. (AP Photo/Raanan Cohen)

Former Democratic Senator Jim Abourezk on Bush’s “Unparalleled Mendacity” and the “Complete Sell Out” of the Democrats as reported today at CounterPunch and Democracy Rising:

To stop the occupation, one must put an end to the incentives provided to Israel that keep them occupying. Those incentives are the financial and political support provided to that occupation by the United States Congress and president, and the radical Zionists throughout the country. When American taxpayers’ money stops flowing to Israel, Israel will stop the occupation and pull back inside the 1967 borders, which will put an end to the conflict there. I am realistic enough to know that, because the Congress is pretty much reliant on money from radical Zionists, stopping the flow of American taxpayers’ money to Israel will not come soon. But the sooner it does end, the sooner the violence will stop.

Racism against people of Arab descent is getting worse, the fires of which are being fanned by the President and by Congress and the media. We continually hear about “radical Islamists” performing acts of terrorism, but did we ever hear Adolf Hitler called a “Christian terrorist,” or a “Christian Dictator?” Or did anyone ever refer to Timothy McVeigh as a “Christian terrorist?”

When anti-black racism was toned down, it was done so by the national political leadership, the media, and regular citizens denouncing those who talked racist talk. That’s not happening with respect to Anti-Arab and Anti-Muslim racism, so it goes on and on, with American people being frightened to death with the word, “Arab,” or “Muslim.” When opinion leaders begin to lead in the right direction, that is when the racial hatred will come to an end.

Terrorism does not exist in a vacuum. It does not come from thin air. It is a result of people who believe that their lives cannot be improved by occupation and that there is nothing left for them to do except to commit acts of terrorism. Professor Robert Pape has written a book, “Dying to Win,” in which he displays the results of his study of suicide bombing. It is driven, not by religion, but by the presence of occupation troops in their lands.

The original terrorist groups in the Middle East were the Jewish terrorist groups, principally the Irgun and the Stern Gang. Interesting, the leaders of those groups, Menachem Begin and Yitzhak Shamir, were elected as Prime Ministers of Israel. That proves that it all depends on who the terrorists are if we are to approve or disapprove of terrorism. Further, the U.S. government designates resistance fighters – such as Hizbollah and Hamas – in the Middle East as terrorists if Israel asks us to do so. That makes it easier to propagandize against the resistance when they are labeled as such. In the Arab world such groups are seen as freedom fighters, resisting an illegal occupation.

Could you even imagine if such hateful, anti-Semitic words were to come out of the mouth of a Republican? This is just amazing!

The author of this article is Kevin Zeese, Director of DemocracyRising.US and a candidate for U.S. Senate, www.ZeeseForSenate.org.

There’s a great follow-up article at CounterPunch on “As neocons and Israel lobby howl for US to bomb Teheran, an Iranian outlines simple path to peace.” Please!

Michelle Malkin has the names of those who died in the attacks, yesterday.
Meryl Yourish explains why rat poison is used in the Palestinian bombs.