After a liberal in the audience attacked Bush today during his question and answer session in Charlotte, North Carolina, Bush defined the clear choice for America in looking ahead at November’s election,
REUTERS VIDEO OF ATTACK HERE

Reuters did not include the President’s outstanding response to the liberal attack.

President Bush explained the choice America again will have to make. 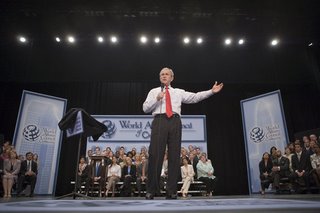 In looking ahead to November, it is clear that Republicans are giving America a clear choice as Ken Mehlman wrote Wednesday and President Bush described on Thursday…

Either a party that is willing to protect America and use every tool available to fight and win the War on Terror,… or we heed the calls of Democrats who would censure and impeach the President for fighting the terrorists.

Although, the polls may favor the Democrats today, it will be interesting to see how liberals explain away these past two years of their regular attacks on the president and America’s national security. Specifically, how do they plan to keep America safe when they:

While answering questions from the audience today in a Discussion on the Global War on Terror in Charlotte, North Carolina, the president responded to an audience member who favors the Democratic plan on national security. This was where the president explained the differences between the two parties in America today:

Q Okay, I don’t have a question. What I wanted to say to you is that I — in my lifetime, I have never felt more ashamed of, nor more frightened by my leadership in Washington, including the presidency, by the Senate, and —

THE PRESIDENT: No, wait a sec — let him speak.

Q And I would hope — I feel like despite your rhetoric, that compassion and common sense have been left far behind during your administration, and I would hope from time to time that you have the humility and the grace to be ashamed of yourself inside yourself. And I also want to say I really appreciate the courtesy of allowing me to speak what I’m saying to you right now. That is part of what this country is about.

THE PRESIDENT: It is, yes. (Applause.)

Q: And I know that this doesn’t come welcome to most of the people in this room, but I do appreciate that.

Q: I don’t have a question, but I just wanted to make that comment to you.

I’d like to describe that decision I made about protecting this country. You can come to whatever conclusion you want. The conclusion is I’m not going to apologize for what I did on the terrorist surveillance program, and I’ll tell you why. We were accused in Washington, D.C. of not connecting the dots, that we didn’t do everything we could to protect you or others from the attack. And so I called in the people responsible for helping to protect the American people and the homeland. I said, is there anything more we could do.

And there — out of this national — NSA came the recommendation that it would make sense for us to listen to a call outside the country, inside the country from al Qaeda or suspected al Qaeda in order to have real-time information from which to possibly prevent an attack.

I then, sir, took that decision to members of the United States Congress from both political parties and briefed them on the decision that was made in order to protect the American people.

** And so members of both parties, both chambers, were fully aware of a program intended to know whether or not al Qaeda was calling in or calling out of the country. **

It seems like — to make sense, if we’re at war, we ought to be using tools necessary within the Constitution, on a very limited basis, a program that’s reviewed constantly to protect us.

Now, you and I have a different — of agreement on what is needed to be protected. But you said, would I apologize for that? The answer — answer is, absolutely not. (Applause.)

Earlier in the day President Bush met with the 2005 and 2006 NCAA Sports Champions.

President George W. Bush reaches up to shake the hands with members of the University of Washington Women’s Volleyball Team Thursday, April 6, 2006, during a photo opportunity with the 2005 and 2006 NCAA Sports Champions. (White House photo by Eric Draper)

The Coalition of the Swilling sends this news article that was written about the liberal at the event, yesterday.