Finally, a crack in the political quagmire in Iraq! 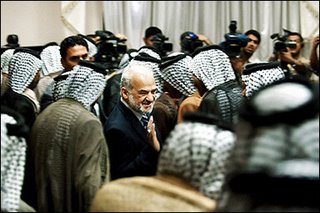 Finally, this may be the key to forming the new government that has been locked in a stalemate for weeks and months:

Embattled Prime Minister Ibrahim al-Jaafari cleared the way Thursday for Shiite leaders to withdraw his nomination for a second term, a step that could break a months-long standoff that is blocking the formation of a new government.

Shiite lawmakers planned to meet Saturday to decide whether to replace al-Jaafari, who faced fierce opposition from Iraq’s Kurdish and Sunni Arab parties.

“The alliance is leaning toward changing (the nomination). The majority opinion is in favor of this,” said Bassem Sharif, a lawmaker in the seven-party Shiite coalition.

Al-Maliki and another leading Dawa politician, Ali al-Adeeb, have been touted as possible replacements for al-Jaafari.

Violence continued in Iraq on Thursday but no casulaties were reported. 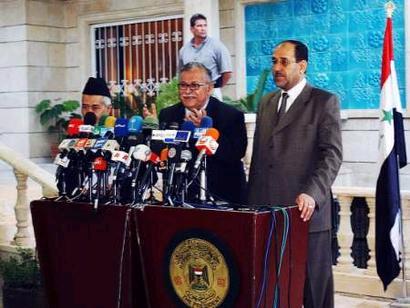 The following is my translation of two headlines and news published by the Iraqi Arabic newspaper “Al-Meda” of April 15th.

Politics dominated after prayer speeches (or lectures) in Mosques throughout Baghdad & the provinces. Most speeches clearly called on the politicians to set aside their differences and quickly form the long awaited for government.

At a Sunni Mosque in Baghdad Sheik Alhamied (member of the Strong Sunni ‘Organization of Muslim Scholars’ said, aimed at Iraqi politicians; ‘Form a Government, we want from you nothing but an agreement based on justice and equality, for with out it you will not succeed in governing our country. He added; “our only rescue from this crisis, is to stand united shoulder to shoulder and hold the line. We must not distinguish between sects and faiths of the Iraqi nation. Iraq is a country for all of us.”

In Nejaf Mr Alqabanchi (Shiite lecturer) said in his Friday lecture in the Fatemiah Mosque, “We warn the Iraqi politicians of loosing the confidence of the religious references (this is what Shiites call their religious leaders who are approved references to the faith) if they do not hurry and form a government”. He added, “Speed up the formation of the government, months have gone by and negotiations have not been fruitful. Your nation is patient and waits hour by hour the formation of the government they elected”.

In the Musa Alkaduhm mosque Mr. Alaaraji (Shiite) pleaded the politicians, “Form a government as quick as possible.” He added, “We must stand united if we are to combat terrorism.”

In Karbala Mr. Alsafi (representative of the main Shiite reference Alsistani) in his Friday lecture he said, “The formation of the government has been delayed for to long. The groups responsible for this delay are the ones who won the election. The reason for the delay is a shortage of trust between these groups.” He added, “I join you in condemning the comments made by Mubarak and ask for a formal and personal apology from him to the people of Iraq.”

As is evident from the above news Iraqi religious leaders and the population is united in many ways:

Are these signs of a nation at civil war?

Or are these signs of a nation struggling for democracy and security?

Iraqis are fighting for their democracy & personal freedom against:

* Alqaida, Zarqawi & his group the expiationists (this is the name given to Muslims who use Islam to divide Muslims and entice violence in the name of Islam) Iraqis and non Iraqis.
* Former Baathis and Saddamist (mostly Iraqis).
* Non-Iraqis infiltrating the country to destabilize and fight democracy. (Syrians, Iranians, Egyptians, Sudanese, Saudis and Jordanians etc….)
* Criminal element. Mostly criminals released when Saddam emptied Iraqi jails and mental wards before we liberated Baghdad. Mostly Iraqis.

Iraqis are free to exert pressure on their political leaders, without fear of retaliation. They are free to demonstrate, free to assemble and ask more from their government. How many other Arabic or Muslim countries can boast the same rights?

Our great country went through Thirteen years of turmoil from the declaration of independence until Washington took office as our first president. It also took six years from the resignation of Washington form the revolutionary army until he took office. During these six years the USA suffered rebellions, fighting against English fighting loyalists, depression, turmoil, political bickering, political jostling & finally political negotiations, change from initial article of confederation to our current constitution. Our early history could be describing current events in Iraq almost to a ‘T’. Iraq and Iraqis must be given time to form their democracy, they must also be given reliable patient support while they labor and forge the formation of their democracy and fight the elements that wish to stop
it.

Big Lizards has more on the developments this morning.
Prairie Pundit offers a suggestion for the political stalemate.
The Real Ugly American has a prediction for Prime Minister from his contacts in Iraq.