After two North Africans killed a Belgian student in a train station over a MP3 player, 80,000 protested in Brussels, Belgium today.

Video of the attackers entering the train station in Brussels, Belgium HERE. 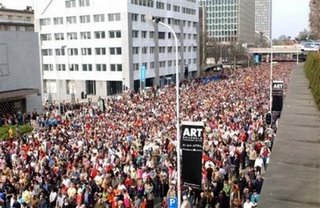 Some 80,000 demonstrators participate in a silent march with the parents of Joe Van Holsbeeck, the 17-year-old who was stabbed to death last week after refusing to hand over his MP3 player two young thieves, in the streets of Brussels, Sunday April 23, 2006. Joe Van Holsbeeck was stabbed to death at the busy Brussels Central train station, a killing that shocked the nation. (AP Photo/Thierry Charlier)

The Brussels Journal says that the Prime Minister and Cardinal are blaming the victims:

The BBC does not mention the ethnicity of the assassins, though many Belgians are worried about the extremely violent mentality of North African youth gangs. In fact, the initiative for the march came from Fouad Ahidar, a Moroccan-born Flemish member of the Brussels regional parliament, who said last week that many immigrants are equally worried about violent Moroccan youth gangs. 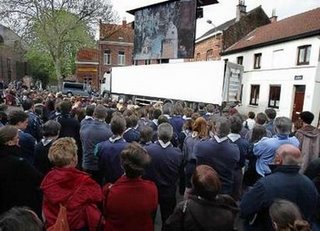 People look at a giant screen during a funeral service for Joe Van Holsbeeck in Brussels, April 20, 2006. Holsbeeck, a 17-year-old teenager, was stabbed to death last week after refusing to hand over his mp3 player to two muggers in a public area at Brussels’ Central railway station during rush hour. (REUTERS/Yves Herman)

Cardinal Godfried Danneels has been very clear about who is at fault here:

For an entire week the police, the authorities and most of the media have tried to downplay the fact that the killers are Muslim youths. Prime Minister Guy Verhofstadt and Cardinal Godfried Danneels addressed the indignation, but gave it a spin of their own. How was it possible for such an atrocity to take place in a crowd with no-one interfering, they asked. Both Verhofstadt and Danneels said that Joe was a victim of “indifference in Belgian society.”

“Where were you last Wednesday at 4 pm?!” the Cardinal asked the congration in Brussels Cathedral during his Easter sermon on Sunday. The Cardinal blamed the murder on the materialism and greed of Western society “where people get killed for an MP3 player.” 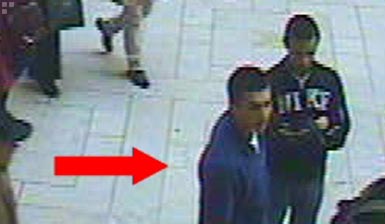 The killers of Joe Van Holsbeeck are shown here in a video from the rairoad station.(vrt.nieuws)

The good news is that this silliness will be over soon enough. As Moammar Qaddafi says, Europe will be Muslim within a few decades.

Update: Officials have arrested a 16 year old Pole in the murder of the Belgian teen.