The “other” stripper at the Duke Lacrosse Team Party is now changing her story on the night in question like a democrat on Saddam Hussein’s weapons of mass destruction. 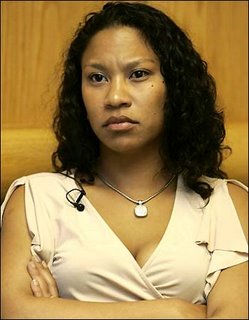 Kim Roberts, the other stripper at the Duke Lacrosse Team Party asks for help from a PR firm on how to make the most of the opportunity that has just landed in her lap… so to speak.

The second stripper in the Duke Lacrosse Team Rape Case is now changing her story and an email she wrote to a PR firm asks how she makes the most of this opprotunity. FOX News has the latest:

Kim Roberts originally said she doubted the story of her colleague, who told police she was dragged into a bathroom and raped by three white males. But now, apparently upset after defense attorneys released photos of the accuser and leaked information about both dancers’ criminal pasts, Roberts says she has to “wonder about their [lacrosse players’] character.”

“I was not in the bathroom when it happened, so I can’t say a rape occurred — and I never will,” Roberts told The Associated Press in an interview. “In all honesty, I think they’re guilty … and I can’t say which ones are guilty … but somebody did something besides underage drinking. That’s my honest-to-God impression.”

“Although I am no celebrity and just an average citizen, I’ve found myself in the center of one of the biggest stories in the country,” Roberts wrote in an e-mail to 5W Public Relations obtained by FOX News. “I’m worried about letting this opportunity pass me by without making the best of it and was wondering if you had any advice as to how to spin this to my advantage. I am determined not to let any negative publicity about my life overtake me. I’m so confused as to who to talk to for relevant advice and I hope that you can return my e-mail. If you cannot help, do you know of any names and numbers I can call?”

I blame Jesse and Al.
La Shawn Barber is disgusted with the whole ordeal.