From the Outlaws at Yale Law School website…
Video of Yale law students and statements by students on behalf of OutLaws and SAME delivered on the steps of the federal courthouse, HERE

Walking to court to file complaint against the Secretary of Defense, Donald Rumsfeld. 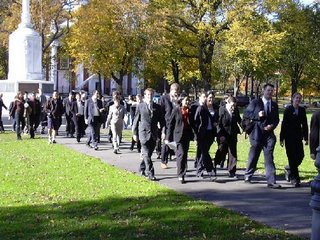 Yale students walking to the courthouse to file our complaint against the Solomon Act. The plaintiffs alleged that the so-called Solomon Amendment which conditions federal funding on the universities on the universities willingness to give military recruiters access to campus violates the students First and Fifth Amendment rights and the DOD interpretation of the amendment is unreasonable. 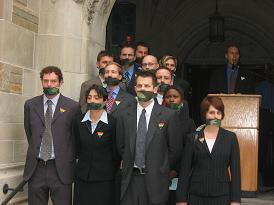 Fall 2002 Protest on the steps of the Yale Law School.

A photo from the October 4, 2002 protest at Yale to end JAG recruitment on campus. 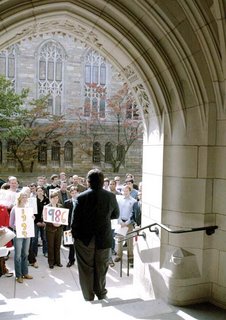 About 50 law students and faculty members gather at the Law School Tuesday afternoon in support of the University’s non-discrimination policy, which is now in its 25th year. (GARY FOX/CONTRIBUTING PHOTOGRAPHER) 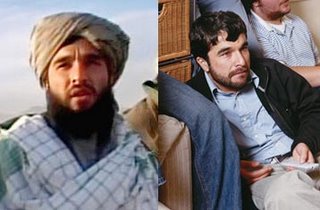 Rahmatullah Hashemi had an appearance in Fahrenheit 9/11 Via Sepia Mutiny:

As the chief spokes-terrorist for the Taliban, Hashemi traveled extensively throughout Europe and the United States. While speaking at the Atlantic Council in 2001, Hashemi was confronted with a woman who detailed the horrors facing the women of Afghanistan at the hands of the Taliban. He dismissed her as if she were an insolent child and announced to the woman: “I’m really sorry for your husband. He might have a very difficult time with you. Hashemi’s disgusting comments were immortalized in Michael Moore’s “Fahrenheit 911…”

John Fund said it best in the Opinion Journal:

Something is very wrong at our elite universities. Last week Larry Summers resigned as president of Harvard when it became clear he would lose a no-confidence vote held by politically correct faculty members furious at his efforts to allow ROTC on campus, his opposition to a drive to have Harvard divest itself of corporate investments in Israel, and his efforts to make professors work harder. Now Yale is giving a first-class education to an erstwhile high official in one of the most evil regimes of the latter half of the 20th century–the government that harbored the terrorists who attacked America on Sept. 11, 2001….

There has been no response to Rahmatullah Hashemi’s acceptance into Yale at the SolomonResponse.org or the Outlaws.

Michelle Malkin has been covering the story extensively.