Courageous protesters are setting up a “tent city” in October Square in Minsk, Belarus today.

The protesters certainly know the dangers they face in this last dictatorship of Europe and one of the six outposts of tyranny. 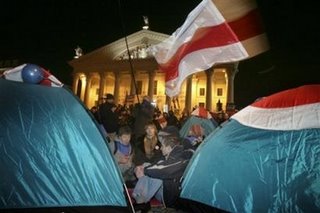 Youth supporters of Belarus’ opposition leader Alexander Milinkevich sit by tents with a banned Belarusian flag on a main square in central Minsk, Belarus, Monday, March 20, 2006. Alexander Milinkevich called for larger crowds to turn out for a Monday evening rally in central Minsk, signaling a bid to gather a growing street presence for protests like those that brought opposition leaders to power in other ex-Soviet republics. (AP Photo/Sergei Grits)

The White House is calling for a new Belarus vote.

Robert Mayer at Publius Pundit is following the exciting developments.
BR23 has updates.