The SIU Cheerleader says that instinct kicked in when she started to cheer after being strapped to a backboard. She didn’t want to let her teammates down! 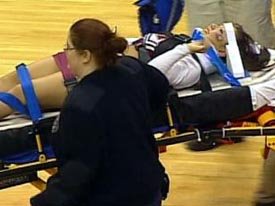 Kristi nosedived onto the hardwood floor with three minutes left in the game but she started cheering when they strapped her to the backboard:

With 3:25 left in the Salukis’ 59-46 victory over Bradley, Kristi Yamaoka fell head-first from about 10 feet in the air onto the Savvis Center floor during the SIU cheerleading squad’s timeout routine.

Yamaoka, a sophomore, was treated by medical personnel and carted off on a stretcher to Saint Louis University Hospital to undergo tests on her head and neck.

Kristi suffered a concussion, a punctured lung and a vertebrae injury in her fall:

Kristi Yamoaka suffered a head, lung and vertebrae injury. “I’m just glad I can walk and talk. I don’t recall getting knocked out. I just remember my legs were to the left side. I knew not to move because I’m a certified life guard. I probably should not have done the arm motions but it’s the cheerleader coming out in me,” explained the 18 year old sophomore about why she continued cheering while being carried out on the stretcher.

The Saluki says she was on top of formation and was supposed to jump up and forward, but instead she fell back. “For the most part I consider myself fortunate. I’m able to speak and move. I feel lucky, and I think I might have been upset if I didn’t have so much support from friends, family and media people I didn’t even know,” said Kristi.

Kristi has to wear the back brace for the next six weeks. After her interview with Katie Couric, she will focus on mid-terms and gearing up for cheerleading tryouts for next year’s squad.

Citing a Southern Illinois University cheerleader’s 15-foot fall onto her head, the Missouri Valley Conference has barred its cheerleaders from certain airborne stunts.