At least three have died as Kurds riot in southern Turkey. 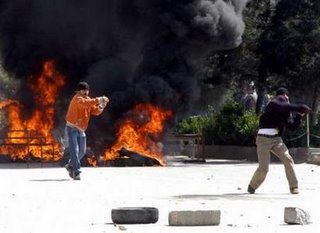 Protesters throw stones to the riot police as they stand in front of a burning barricade during clashes in southeastern Turkish city of Diyarbakir, March 30, 2006. The violence erupted on Tuesday after funeral ceremonies for 14 guerrillas of the banned Kurdistan Workers Party (PKK), killed by security forces in a military operation last weekend. (REUTERS/Anatolian News Agency)

Turkey is experiencing its worst street fights in a decade as police and Kurdish fighters continue to clash in the southwest:

Kurdish rioters have clashed with police in southeastern Turkey in a second day of violence that has left at least three people dead and 250 injured.

The fighting on Wednesday was the worst street fighting in the region in a decade and began after the funerals of four Kurdish fighters who were killed in fighting with Turkish soldiers.

The provincial governor said that between 2500 and 3000 Kurds rioted in Diyarbakir, the largest city in the overwhelmingly Kurdish region, damaging government offices, private businesses and banks. 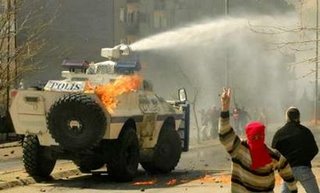 A demonstrator makes a victory sign as a riot police armoured personnel carrier catches fire during clashes between pro-Kurdish separatists and security forces in southeastern Turkish city of Diyarbakir, March 28 2006. Protesters clashed with police in southeastern Turkey on Tuesday after funerals for four of the 14 Kurdish separatists killed during a military operation last week. (REUTERS/Ihlas News Agency)