Salahuddin Amin was involved in discussions to buy an atomic bomb! 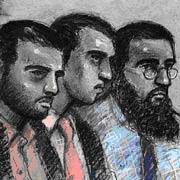 A terrorist on trial in Great Britain is accused of discussions to buy a nuclear bomb from the Russian mafia. Sky News has this:

One of the suspected terrorists on trial for allegedly plotting a nationwide bombing campaign has been linked to a nuclear weapon. An Old Bailey jury was told Salahuddin Amin had been involved in discussions to buy an atomic bomb.

The prosecution said contact had been made with the Russian mafia in Belgium to buy the radio-isotope device. Seven men – all British citizens – are on trial accused of conspiring to cause explosion. The prosecution claims the gang planned to blow up pubs, nightclubs, trains and also considered hitting the UK’s power infrastructure.

They wanted to blow up “the biggest nightclub” in central London, prosecutor David Waters QC said. In February, 2004, they were allegedly overheard discussing bomb targets. Mr Waters said: “Jawad Akbar referred to attacks upon the utilities, gas, water or electrical supplies. “Alternatively, a big nightclub in central London might be a target.”

Amin was held in Pakistan for 10 months before being returned to Great Britain for trial:

Salahuddin Amin, 29, was arrested in Heathrow Airport after arriving on a British Airways flight from Pakistan.

He was arrested in one of the biggest terror sweeps in Great Britain’s history:

He is accused along with six Britons and a Canadian, who were arrested last year following Britain’s biggest anti-terrorism operation since the Sept. 11, 2001 attacks.

Police said then that they had seized more than half a tonne of ammonium nitrate fertiliser, which can be used to make bombs, in a west London warehouse….

Apparently, the terrorist plot that Amin was involved in was weeks away from completion before it was busted by British Authorities:

The conspiracy allegedly involved remote control detonators and 600kg (1,300lb) of ammonium nitrate fertiliser and was moving towards its “final phase” when arrests were made in late March 2004.

Potential targets discussed by the gang, who already had the components for the bombs, are said to have included “the biggest nightclub in central London”, the huge Bluewater shopping centre in Kent and Britain’s power infrastructure.