Russ Feingold is swiftboated! More truth about the democratic senator was disclosed today. Even the Washington Post could not ignore it!

** But, is this news really that surprising coming from a member of a party with no boundaries or borders? **

First it was Jimmy and Bill, then it was Al Gore, then Bill Clinton on one of his visits to the UAE (before his “ports payments” were disclosed), and now…

…Daily Kos contributor and the voice of the Democratic Party, Wisconsin Senator Russ Feingold, joins in this despicable Democratic practice of demoralizing troops in harms way while on foreign turf for their own political ambitions!

Captain’s Quarters had this to say:

We used to say that American politics stopped at the water’s edge, a reminder that we confine our policy debates within our own borders and project a united front abroad. That splendid tradition died a few years ago, starting with Jimmy Carter’s open conflict with Bill Clinton in North Korea and Haiti and escalating during the war on terror. However, American politicians have at least understood that when traveling to the war zone, the troops and the public expect them to stick to supportive statements and not engage in protests against our mission. At least, they used to understand that — but Wisconsin Senator and 2008 presidential hopeful Russ Feingold decided to make his visit to Iraq a soapbox to bolster his anti-war credentials.

The Captain was speaking of this news conference reported by the Washington Post from Iraq where the senator blasted the US troops fighting there:

Feingold said he believed “a large troop presence has a tendency to fuel the insurgency because they can make the incorrect and unfair claim that the U.S. is here to occupy the country.”

“I think that it’s very possible that the sectarian differences are inflamed by the fact that U.S. troops are here,” he continued, adding that their long-term presence “may well be destabilizing, not stabilizing.”

U.S. politicians traditionally avoid public disagreements when traveling abroad, particularly in war zones where U.S. troops are engaged. McCain said the argument was better suited for the Senate floor, and Feingold said he would “go into more details when I’m home.”

Thank you Senator McCain! Not that your words will make a difference with your travel buddies, but you are certainly correct with your respectful remarks.

It is interesting that the good Senator from Wisconsin likes everyone to see him standing with the troops who are fighting in Iraq (from his website) even though he promotes the “cut and run” losing approach to the War in Iraq. 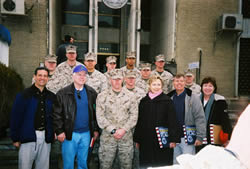 Those democrats sure like their picture taken with US soldiers.
It’s too bad they don’t support them.

Related:
Democracy Project has more on Instapundit’s thoughts last week that “terrorism is an information war disguised as a military conflict.”

It’s sad to see who the good democrats have been helping in this information war.