10 people were killed from kite terrorism last week in Pakistan! 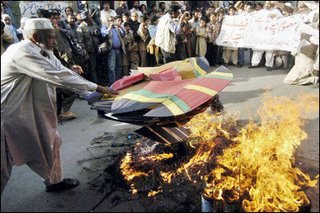 Pakistani protesters burn kites during a protest in Lahore. Pakistan has detained 1,000 people for flying kites and warned they could be tried as terrorists after 10 people were killed in a week by strings coated with glass or made from metal.(AFP/Arif Ali)

One thousand people were arrested in Pakistan for flying kites after 10 people were killed last week from kite flying:

Pakistan has detained 1,000 people for flying kites and warned they could be tried as terrorists after 10 people were killed in a week by strings coated with glass or made from metal.

Days ahead of an annual kite-flying festival in the eastern city of Lahore, — the only 15 days of the year when the sport is permitted — police were cracking down to stop more casualties.

“We cannot allow people to play with the lives of ordinary citizens in the name of sports,” he said.

The families of some victims burned kites at a street protest in Lahore on Tuesday, while political parties have demanded an outright ban on the popular pastime.

Revellers taking part in the Basant festival, which marks the start of the spring in Punjab, spend millions of rupees on day-and-night kite battles and the skies are filled with the brightly coloured toys.

Many people use strings coated with a paste containing glass powder or with iron wool to sever the strings of rival kites. But the cords have also claimed the lives of 10 people, most of them children, police and newspapers said.

Most are killed when the strings fall across roads at head height and slit the throats of people on motorbikes. 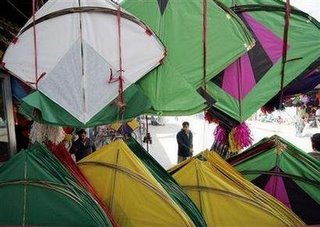 Kites are displayed at the kite market in Rawalpindi, Pakistan, February 28, 2005. Already kite-flying is banned for all but 15 days of the year but a provincial minister warned kite-flyers this week that any who cause injury or death with string made from metal or coated with glass could be tried under anti-terrorism laws. (REUTERS/Mian Khursheed)

The The Pakistani Operations Minister also ordered formation of special teams of policemen in plainclothes at police station level to make videos of kite flying law violators so that these could be used as evidence in court. He said the police had sent the seized prohibited material to the court for permission to destroy it.

Fundamentalist groups in Pakistan believe that flying kites is un-Islamic!

Pakistan’s supreme court banned kites in 2005 amid complaints that they killed dozens of people every year.

The ban was lifted for 15 days this year at the request of the provincial government so the festival could go ahead, on condition that dangerous string was outlawed.

Fundamentalist groups also oppose kite-flying on the grounds that it is un-Islamic.