With all of the news on open borders and illegal immigration, these three terrorist and radioactive bomb stories may have slipped to the back pages today.
Here’s a roundup:

* Undercover US investigators successfully smuggled into the United States enough radioactive material to make two dirty bombs… through the borders… north and south… even though they set off alarms.

* The judge on the “dirty bomber” terrorist case today issued an order to stop information from being disclosed that could jeapardize national security.

* And, Great Britain continued the trial of the atomic bomb seeking terrorist today.

The alleged “dirty bomber” was in the news again today. 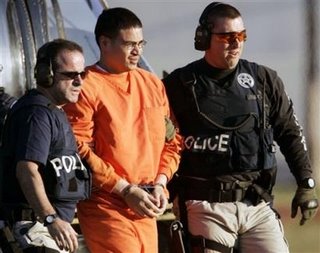 The New York Times today found an article on dirty bombs newsworthy enough to include on page A14. With all of the news about borders and immigration, some legal, some not, it was generous of the NY Times to find room on page A14 to give it a mention.

The test, conducted in December by the Government Accountability Office, demonstrated the mixed progress by the Department of Homeland Security, among other federal agencies, in trying to prevent terrorists from smuggling radioactive material into the United States.

The judge on the Jose Padilla case today issued an order to stop information from being disclosed by the defense in the “dirty bomber’s” case:

The information is expected to include secret FBI investigations, material provided to the United States by foreign governments and Padilla’s own words from interrogations during his 3 1/2 years in military custody as an “enemy combatant.”

Cooke said the order, issued under the federal Classified Information Procedures Act, would allow lawyers for Padilla and his co-defendants to begin examining secret evidence under special conditions so they can prepare for a trial scheduled to begin in early September.

“We’ve got to go forward,” Cooke said at a hearing on the issue.

Padilla is a former Chicago gang member once accused of plotting as an al-Qaida operative to detonate a radioactive “dirty bomb” inside the U.S., although those allegations weren’t mentioned in the indictment. He and four others are charged with being part of a North American terror support cell that provided recruits, money and supplies to Islamic extremists worldwide.

The Bluewater shopping center in Kent, England was one of the Saturday terrorist targets. (Telegraph)

And, also in the news today, Salahuddin Amin, the British man on trial for terrorism and who is accused of actively seeking a radioactive bomb, was back in court today. Convicted terrorist Mohammed Babur was back on the stand:

A terror cell planned to smuggle bomb ingredients into the UK using shampoo and shaving cream bottles and bags of dried fruit, the Old Bailey has heard.
The British men intended to sneak detonators, aluminium powder and ammonium nitrate into the country, “supergrass” Mohammed Babar said.

He said alleged plotter Omar Khyam of Crawley, West Sussex, believed he had “found” the right components for bombs.

Suspects Salahuddin Amin, 31, from Luton, Bedfordshire, and Mr Khyam, 24, are alleged by the prosecution to have received training in explosives and use of the poison ricin in Pakistan.

According to Babar, a London Underground worker called Imran had also been at the training camp in 2003.

Mr Khyam “wanted to do a martyrdom operation using a belt bomb and he had Imran in mind”, he told the jury.

Salahuddin Amin had tried to obtain an atomic bomb. He had made contact with the Russian mafia in Belgium and from the mafia he was trying to buy this bomb.