On March 3, 2006 at a mosque in Norway a violent brawl broke out that left four men seriously injured. The PakTribune reported the story (Via Western Resistance)

The incident took place on Friday evening when a armed group attached on leader of opposition group of the Markazi Jamaat Ahle Sunnat’s Mosque, the largest Muslim religious center in Norway.

Soon after the attack, some supporters of the victim group also raided to take revenge inside the mosque. Four persons including Malik Mohammad Raza, former President of Markazi Jamaat Ahle Sunnat Oslo, Norway were seriously injured in the two events of the fighting.

Talking to Online Malik Raza accused the ruling party local politician, Khalid Mahmood for attack on him. Police registered the case in the context and started the necessary inquiry. Police confirmed injuring of three people in the event.

“We first got a report that five-six people were fighting outside the mosque. It was said that one of these was driven by taxi to the emergency ward. When we arrived at the scene it became clear that three persons had been injured and gone to the emergency ward,” “Police operation leader Even Jørstad said.

Western Resistance continues to explain that although Khalid Mahmood claims he was attacked the police told reporters they have no knowledge of that:

In retaliation for the attack outside the mosque, some people had gone inside to attack people inside. Mahmood is reportedly a supporter of one of the factions within the mosque. He claims that he was attacked by a man with a knife, who escaped in a taxi.

The Markazi Jamaate Ahle Sunnat Oslo is a mosque frequented and run almost exclusively by Muslim immigrants from Pakistan.

The PakTribune states that: “Police persons told newsmen that they had no knowledge of the politician being attacked”.

Aftenposten also relate that police, upon being asked by them, stated that they did not have knowledge of the politician being attacked.

Dagbladet newspaper was told by a witness that one of the individuals was standing outside the mosqe when four men approached, one carrying an iron bar, another a knife. The victim was struck about the head with the iron bar.

Norwegian Labor Party members are concerned that the knifing may reflect negatively on the party. 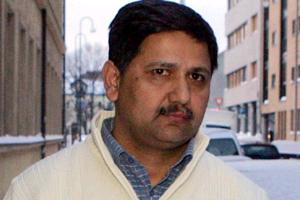 And, party members are asking Khalid to explain.

For some reason, this little knife attack story is not going away and now Party members are asking Khalid Mahmood to explain his role in the mosque attacks (Via Media Front):

The Labor Party’s group leader in the Oslo city council, Rune Gerhardsen, will require party colleague Khalid Mahmood explain his role in the high-profile violent clash at an Oslo mosque.

“With the dimensions this case has taken on, and the many different accusations flying, I will ask Mahmood to give a complete briefing,” Gerhardsen told newspaper Dagsavisen.

Gerhardsen would not say if confidence in Mahmood had been shaken, or if he feared the Labor Party’s reputation had been blackened by a colleague being accused of having had a violent role in the Oslo mosque’s internal conflict.

“Khalid has for many years been a trusted colleague and I want to hear his version. First after he has explained the story behind this and what happened can I have an opinion about it,” Gerhardsen said.

There are fears that public confidence in Khalid Mahmood has been shaken.