** In a city that is nearly 98% black, the attorney for Democratic Party Leader Charles Powell Jr. claimed yesterday that the conviction of his client was due to racism and the suppression of the black vote! **

The defendants were black, the witnesses were black, the city is 97.74% black, and the secret recordings used as evidence during the trial were of black people.
But the defense says this was about racism? …No, it’s about vote fraud!. 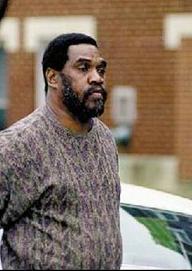 Charles Powell, Jr. is the 5th Democratic Leader to be convicted and sentenced for election violations during the 2004 election:

Powell, until last month the chairman of the city’s powerful Democratic Central Committee, remains free pending his surrender to the Federal Bureau of Prisons. Powell must serve at least 85 percent of his sentence, or nearly 18 months.

Near the end of his remarks, Cook used a projector to flash a photo of Martin Luther King Jr. and President Lyndon Johnson seated together during debate over the Voting Rights Act of 1964.

“Your honor, this is about racism,” Cook said of Powell’s prosecution. “This is about suppressing the vote of black people.”

Powell, the Democratic Party Leader in East St. Louis until last month even after his conviction in July of 2005, was sentenced for orchestrating a conspiracy to pay voters either $5 or $10 apiece to vote for a slate of Democratic candidates in the 2004 election.

At least 16 St. Louis area Democrats have been found guilty of election crimes since the 2004 election!

Last month, Powell’s cohort at City Hall, Kelvin Ellis, was sentenced to four and a half years in prison for plotting murder of a federal witness and vote fraud.

** This is a CLASSIC! Speaking of Election Violations!**

Independent Conservative has more on the story.