The Israeli Anti-Semitic Cartoon Contest Gallery is now open for your viewing pleasure.

The Israeli contest was set up in response to this hateful Anti-Semitic contest announced by the Hamshahri newspaper in Iran in February. 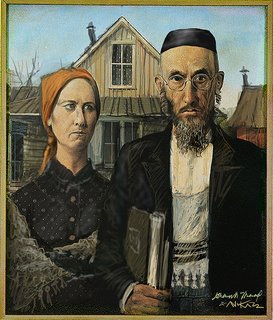 A new tactic has emerged in the angry debate over cartoons depicting religious figures, as an Israeli artist launches a contest for the best anti-Semitic cartoon — drawn by a Jew. Amitai Sandy says the Israeli Anti-Semitic Cartoons Contest is a response to an Iranian newspaper’s competition for cartoons on the Holocaust.

Sandy, who is also the publisher of Dimona Comix, describes the issue as a matter of pride. He insists that Jews can offer sharper, more offensive satire of themselves than anyone. After the contest’s deadline of March 5, 2006, the winners will be displayed in Tel Aviv.

Big Pharoah has selected his favorites.

Neander News wrote about the Israeli contest when it was announced.

Freedom for Egyptians would rather belly dance.