Enrique Morones, organizer of the massive immigrant protests this past week across the country was interviewed on “The O’Reilly Factor” Monday night. He went off on a tirade that would have been absolutely shocking a couple of years back. Sadly, this type of talk coming from the Left is all too common anymore.

HERE is part one of the interview. 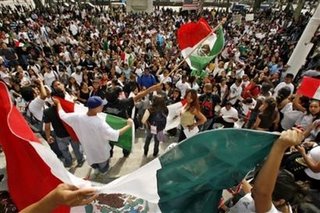 Enrique Morones really let his hair down in this later exchange from the O’Reilly interview:

Enrique Morones: The American sins of the past, invading Mexico, taking half of its territory, that’s the past. There’s no serious movement to take that back like the fearmongers like to say…

Bill O’Reilly: Should we continue to pay their bills at hospitals?

Enrique Morones: It doesn’t happen now(?)… We should pay their bills.

Enrique Morones is a member of the radical Buenas Noches Border control group. Here is a segment from one of their postings that was published in several leftist and anarchist websites:

From a Buenas Noches Brigade

A Call for Autonomous Direct Action to Smash the Rise of Fascism and Racism In Our Communities.

A Call for Autonomous Direct Action to Smash the Borders That Capitalism Depends On.

This is a call to all people who will be converging on the San Diego/Tijuana, Campo and Calexico/Mexicali regions to engage in autonomous direct action to stop the Minutemen, document it and share it with the world.

Enrique likes to blame America for causing terrorism and destruction in the world. 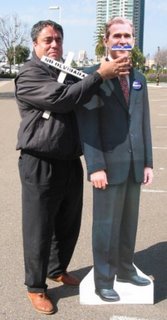 No, this isn’t Crawford, Texas and that’s not really George Bush. It’s Morones at a protest blaming the US for border deaths.
(Piece of Mind)

Here is one of the more rowdy events where Enrique Morones and his group attacked a group of Minutemen volunteers in July, 2005:

The usual suspects showed up to protest our peaceful gathering. All the usual hate was spewed at the 60 -80 minutemen to no avail. There were a few media members from Spanish language stations, so the angry mob known as Gente Unida, pretended to be more civil with their leader, Enrique Morones, formerly head of the Border Angels, reading a solemn prayer and a recitation of the 3500 illegal aliens who have died trying to cross our border illegally.

After a few moments, he blamed that and every other death in the Western hemisphere on the minutemen. Then he ranted on and on in Spanish for some reason, and then the mob turned ugly.

They targeted Jim Chase, getting right up in his face, screaming and taunting him after they breeched our line. Finally the sheriffs took charge & tried to marshall the protesters back into the border road, but to no avail. Jim Gilchrist arrived, and the mob came to life threatening to kill him, calling him names, but Jim never responded.

Enrique puts up a cross representing the death of an immigrant. Who’s to blame for this tragedy? (from Border Angels website)

Finally, the man behind this week’s protests wrote this to the San Diego Union Tribune:

U.S. in no position to advise Mexico
Regarding “Poor relations / Five goals for Mexico in the new year” (Editorial, Dec. 26):

You’ve got to be joking. Saying that Mexico should not meddle in another country’s affairs is totally without credibility from a country that invades countries to gain land (the invasion of Mexico in 1846) and has a long history of pariah politics for its own self-righteous reasons.

The United States invades a country to settle the score on Sept. 11, 2001; Iraq wasn’t involved. No, wait, it’s to find weapons of mass destruction; none found. No, hold it, it’s to fight terror; there’s more terror now than ever. No, here’s the latest reason: to promote democracy; PresidentBush and his administration are far, far from democracy. No, it’s to – who knows what Bush and his corrupt administration will make up next?

The credibility of the Union-Tribune is less than zero when it does everything possible (in two languages) to discredit and slam Mexico every chance it gets. Once the United States stops exporting the demand for drugs (80 percent of the world’s illegal drugs consumed by Americans), ruining the environment (35 percent of world environmental damage is caused by the United States and U.S. companies), stops helping to create terror (Bush policies have created more terror cells than ever), stops taking from the world (the United States consumes 30 percent of the world’s natural resources) and continues to meddle in the world with a total disregard for human rights and so much more, then and only then can the United States or the Union-Tribune even consider giving advice to other countries.

For now, impeach Bush and let’s honor world treaties, starting with treaty of Guadalupe Hidalgo, signed after the United States Mexico and took half its territory.

Why is it that all of these leftist groups are led by America haters?