Jamie Allman sends the latest on the gruesome torture at this infamous prison.

BREAKING: ABU GRAIB PRISON ABUSE DETAILS THAT WILL CHANGE THE WAY YOU LOOK AT ABU GRAIB….

As Saddam Hussein watched quietly from the dock, prosecutors displayed Tuesday what they said was his signature on orders of execution for 148 men and boys, some as young as 11, in what appeared to be the first evidence linking the former dictator to large-scale crimes since his trial began in October.

The presentation was a striking turnaround for a trial that had been widely dismissed as a farce, with the defendants and their lawyers alternately refusing to appear and delivering angry tirades in court…

…One letter stated: “It was discovered that the execution of 10 juveniles was not carried out because their ages ranged from 11 to 17 years old. We recommend executing them in a secret manner in coordination with the management of the prison and the Mukhabarat.”

Until now, much of the trial has been a flamboyant battle of wills between the chief judges on the one hand, and Mr. Hussein and Mr. Ibrahim on the other. But on Tuesday, Mr. Musawi quickly established himself as a new force in the courtroom. When Mr. Ibrahim began bickering with the current chief judge, Raouf Abdel-Rahman, the prosecutor interceded, pointing at Mr. Ibrahim and loudly demanding that he listen to the documentary evidence.

As the documents were being read, the defendants stayed in their seats, seemingly stunned by the sight of their own names and signatures…

…Of the 148 men and boys whose death warrants Mr. Hussein is accused of signing, 96 were hanged in the Abu Ghraib prison, the documents showed. Forty-six died under torture, including four additional inmates who were accidentally added to the group. Ten boys and adolescents were executed in 1989, after they reached the legal age. 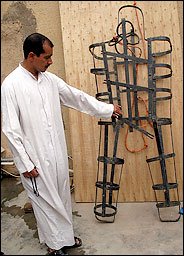 A device taken from one of Uday Hussein’s torture chambers in the basement of the building, now on display in Al Hekmah mosque in the former Saddam City in Baghdad. (Free Serbia)

Previously on the Saddam Hussein Trial:
Saddam’s Signature on Orders of Execution May Bring His Own