At a children’s library in Missouri…

The story of Roy and Silo, who adopted an abandoned egg in the late 1990s, will be moved in this northwest Missouri library. 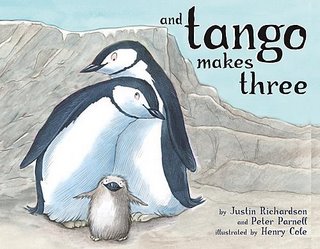 “And Tango Makes Three” is based on a true story of two male penguins in New York City’s Central Park Zoo.

Books about animals displaying homosexual tendencies have been banned from the Rolling Hills Missouri Library. “And, Tango Makes Three”, a true story about two male penguins sharing egg sitting duties was moved to the non-fiction section where it would be less likely to blindside someone:

A book about two male penguins that raised a baby penguin has been moved from the children’s section to the non-fiction section of two public library branches after parents complained about homosexual undertones.

The illustrated children’s book, “And Tango Makes Three,” is based on a true story of two male penguins in New York City’s Central Park Zoo.

The penguins, named Roy and Silo, adopted an abandoned egg in the late 1990s.

Two parents expressed concerns about the book last month with librarians at the Rolling Hills’ Consolidated Library’s branch in the north-west Missouri town of Savannah.

The book, written by Peter Parnell and Justin Richardson, has since found a new home in the non-fiction section at the library in Savannah and at another branch near St Joseph. 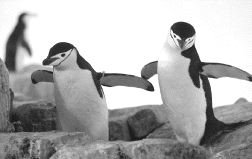 Roy and Silo seen frolicking in New York, are being asked to stay clear of Missouri. The penguins are inseparable and have been devoted to each other for over six years.